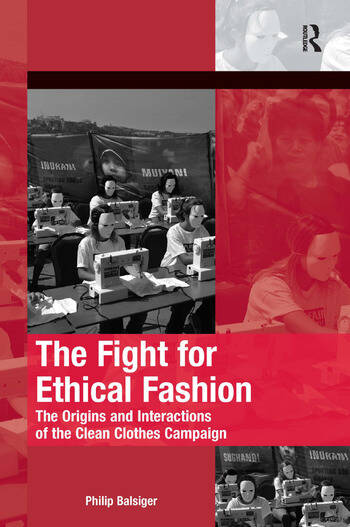 The Fight for Ethical Fashion: The Origins and Interactions of the Clean Clothes Campaign

From consumer boycotts and buycotts to social movement campaigns, examples of individual and collective actors forging political struggles on markets are manifold. The clothing market has been a privileged site for such contention, with global clothing brands and retailers being targets of consumer mobilization for the past 20 years. Labels and product lines now attest for the ethical quality of clothes, which has, in turn, given rise to ethical fashion. The Fight for Ethical Fashion unveils the actors and processes that have driven this market transformation through a detailed study of the Europe-wide coordinated campaign on workers’ rights in the global textile industry - the Clean Clothes Campaign. Drawing on insights from qualitative fieldwork using a wide range of empirical sources, Philip Balsiger traces the emergence of this campaign back to the rise of ’consumer campaigns’ and shows how tactics were adapted to market contexts in order to have retailers adopt and monitor codes of conduct. By comparing the interactions between campaigners and their corporate targets in Switzerland and France (two countries with a very different history of consumer mobilization for political issues), this ground-breaking book also reveals how one campaign can provoke contrasting reactions and forms of market change.

’The Clean Clothes Campaign is at the center of a growing movement that is already having an enormous impact on world markets by targeting sweatshop practices. Balsiger not only offers well-crafted studies of the French and Swiss campaigns, but he advances our theoretical understanding of strategic interactions by viewing markets as key arenas for social contestation and change. Balsiger is a powerful new voice in the field of politics and protest, and we should all listen.’ James M. Jasper, CUNY Graduate Center, USA ’While critical consumerism has often been considered an individual act, within a very original and innovative approach, Philip Balsiger locates campaigns for ethical fashion within the complex interactions between markets and movements. Bridging social movement studies with economic sociology, the cross-national and trans-national comparative analysis greatly enriches our knowledge of contentious markets.’ Donatella della Porta, European University Institute, Italy ’This is an important and meticulously researched book. By focusing on political consumerism, Balsiger contributes to social scientific work on social movements by explicitly focusing on a social movement that looks beyond those that target the state to those that target other systems of authority. Because the book offers a comparison of this movement in two different countries, it offers unique analytic leverage on this subject. The book is a must-read for sociologists, political scientists, historians, economic sociologists, and organizational scholars alike.’ Sarah A. Soule, Stanford Graduate School of Business, USA

The Fight for Ethical Fashion: The Origins and Interactions of the Clean Clothes Campaign