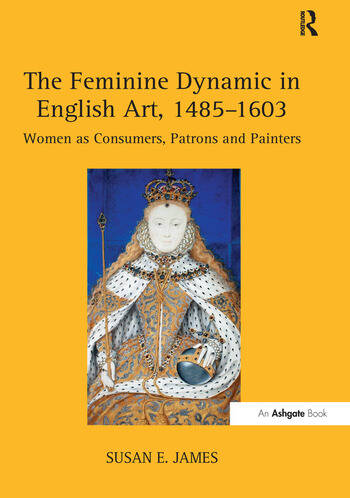 The Feminine Dynamic in English Art, 1485–1603: Women as Consumers, Patrons and Painters

A significant contribution to the understanding of sixteenth-century English art in an historical context, this study by Susan James represents an intensive rethinking and restructuring of the Tudor art world based on a broad, detailed survey of women's diverse creative roles within that world. Through an extensive analysis of original documents, James examines and clarifies many of the misperceptions upon which modern discussions of Tudor art are based. The new evidence she lays out allows for a fresh investigation of the economics of art production, particularly in the images of Elizabeth I; of strategies for influencing political situations by carefully planned programs of portraiture; of the seminal importance of extended clans of immigrant Flemish artists and of careers of artists Susanna Horenboult and Lievine Teerlinc and their impact on the development of the portrait miniature. Drawn principally from primary sources, this book presents important new research which examines the contributions of Tudor women in the formation, distribution and popularization of the visual arts, particularly portraiture and the portrait miniature. James highlights the involvement of women as patrons, consumers and creators of art in sixteenth-century England and their use of the painted image as a statement of cultural worth. She explores and analyzes the amount of time, money, effort and ingenuity which women across all social classes invested in the development of art, in the uses they found for it, and the surprising and unexpected ways in which they exploited it.

Susan E. James is an historian and independent researcher. She received her PhD from Cambridge University and is the author of Kateryn Parr: The Making of a Queen (Ashgate, 1999) and a contributor to the Oxford Dictionary of National Biography (2004).

'This book presents a remarkable amount of entirely new material that will change our whole picture of the arts in Tudor England. It shows the importance of women as patrons, collectors, makers and subjects of art, but it does much more than that: it expands our notion of artistic production and consumption in the period, proving that renaissance England had a much richer, more vibrant visual culture than we had ever imagined.' Elizabeth Honig, University of California, Berkeley, USA

’This title reaches across several disciplines, not only art history but also women’s studies, social studies, and history and is well-suited for academic libraries.’ ARLIS/NA Reviews

’Historians and all scholars interested in the detailed lives of women as artists, patrons, and consumers of visual culture will want to have this book on their shelves.’ Renaissance Quarterly

’Susan E. James' detailed account of the vital role played by the women who produced, commissioned, collected, displayed and sat for English artworks in the Tudor period is an impressive work, and a significant addition to Ashgate's excellent 'Women and Gender in the Early Modern World' series. ... James' detailed research, including studies of household accounts and court records, reveals much new information regarding the complex structures of patronage, and she has produced a fascinating book...’ The Art Book

’...a detailed and wonderfully illustrated history of women’s roles in the production, distribution, and consumption of art in Tudor England...Highly recommended.’ Choice

'Susan James's new book is in many respects a ground-breaking examination of the role of women in the patronage, collecting and creation of art in Tudor England. By deploying evidence gleaned from extensive research into sixteenth-century wills and household accounts, James is able to paint a picture of the proliferation of women's involvement in the arts of this period. There has been no other modern study which devotes such close attention to women's art-related activities in early modern England, and to this extent James's researches begin to fill an important gap in our knowledge and understanding.' Gender & History

The Feminine Dynamic in English Art, 1485–1603: Women as Consumers, Patrons and Painters