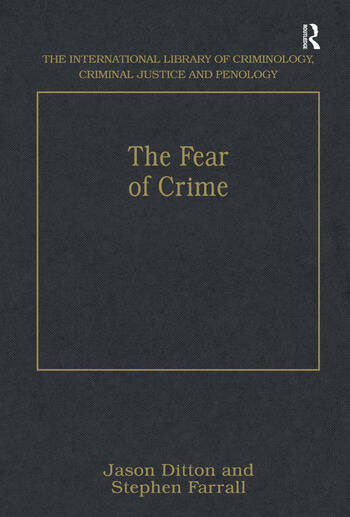 The Fear of Crime

Studies of the fear of crime have constituted what is undeniably the fastest growing research area within criminology in the last decade and this shows no sign of diminishing. The editors have a distinguished record of innovative research in the field, being responsible for a number of seminal empirical and theoretical articles. In this volume, they have collected together and for the first time, all the most significant contributions to the field. The collection includes an introductory essay by the editors and articles reflecting: an overview of the field; the causes of vulnerability; the sources of information on victimisation; the methods used to survey fear; the theoretical models employed to explain it; and the nature of policies designed to reduce fear.

Contents: Part 1 An Overview of the Field: Public reaction to crime in the streets, Frank F. Furstenberg; A cross-national comparison of victims of crime: victim surveys of 12 countries, Richard Block. Part 2 The Causes of Vulnerability: Safe conduct: women, crime and self in public places, Carol Brooks Gardner; Boys don't cry: masculinities, fear of crime and fearlessness, Jo Goodey; The elderly's fear of crime: a critical examination of the research, Randy L. LaGrange and Kenneth F. Ferraro; Fear of criminal victimisation: the effect of neighborhood racial composition, Gertrude L. Moeller; The effects of building size on personal crime and fear of crime, Oscar Newman and Karen A. Franck; The impact of victimisation on fear, Wesley G. Skogan. Part 3 The Sources of Information on Victimisation: The impact of a crime wave: perceptions, fear and confidence in the police, Mary Holland Baker, Barbara C. Neinstedt, Ronald S. Everett and Richard McCleary; Living with television: the violence profile, George Gerbner and Larry Gross; Television viewing and fear of victimisation: is the relationship causal?, Anthony N. Doob and Glenn E. Macdonald; Television viewing and the fear of crime: where is the mean world?, Linda Heath and John Petraitis; Feeling safe by comparison: crime in the newspapers, Allen E. Liska and Paul Baccaglini; Fear of crime: read all about it? The relationship between newspaper crime reporting and fear of crime, Paul Williams and Julie Dickinson. Part 4 The Methods of Surveying: The measurement of the fear of crime, Kenneth F. Ferraro and Randy LaGrange; Methodological problems in the study of fears, James W. Croake and Dennis E. Hinkle; New methodological perspectives for victimisation surveys: the potentials of computer-assisted telephone surveys and some related innovations, Martin Killias; Methodological problems in victim surveys and their implications for research in victimology, Anne L. Schneider. Part 5 Theoretical Models of Explanation: Criminology: testing alternative models of fear of crime, Ralph B. Taylor and Margaret Hale; Fear of crime in residential environments: testing a social psychological model, Adri van der Wurff, Leendert van Staalduinen and Peter Stringer; Vulnerability, locus of control and worry about crime, Vincent F. Sacco and William Glackman; Block crime and fear: defensible space, local social ties and territorial functioning, Ralph B. Taylor, Stephen D. Gottfredson and Sidney Brower. Part 6 Policies to Reduce Fear: Fear of crime: the effect of improved residential security on a difficult to let estate, Patricia Allatt; The effectiveness of a police-initiated fear reducing strategy, Trevor Bennett; Reducing fear of crime: strategies for intervention, Jeffrey Hennig and Michael G. Maxfield; Community crime prevention: an analysis of a developing strategy, Dan A. Lewis and Greta Salem; Environmental improvements and the fear of crime: the sad case of the 'Pond' area in Glasgow, Gwyneth Nair, Jason Ditton and Samuel Phillips; Afraid or angry? Recalibrating the 'fear' of crime, Jason Ditton, Jon Bannister, Elizabeth Gilchrist and Steven Farrell; Name index.

The Fear of Crime