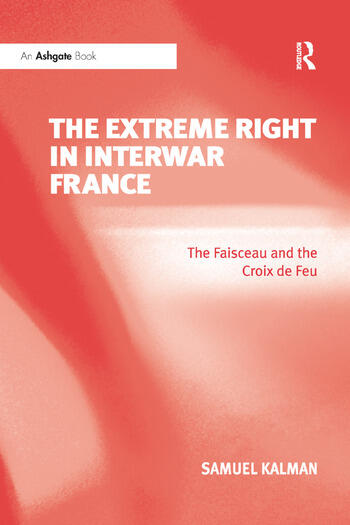 The Extreme Right in Interwar France: The Faisceau and the Croix de Feu

Historians of the French extreme right frequently denote the existence of a strong xenophobic and nationalist tradition dating from the 1880s, a perpetual anti-republicanism which pervaded twentieth-century political discourse. Much attention is habitually paid to the interwar era, deemed the zenith of this success, when the leagues attracted hundreds of thousands of members and enjoyed significant political acclaim. Most works on the subject speak of 'the French right' or 'French fascism', presenting compendia of figures and organizations, from the Dreyfus Affair in the 1890s through the notorious Vichy regime, the authoritarian construct which emerged following the defeat to Nazi Germany in June 1940. However, historians rarely discuss the programmatic elements of extreme right-wing doctrine, which demanded the eradication of parliamentary democracy and the transformation of the nation and state according to group principles. Instead, most detail the organization and membership of various organizations, and often recount their quotidian activities as political actors within (and in opposition to) the Third Republic. This book offers a new interpretation of the extreme right in interwar French politics, focusing upon the largest and most influential such groups in 1920s and 1930s, the Faisceau and the Croix de Feu. It explores their designs for extensive political, economic, and social renewal, a project that commanded significant attention from the leadership and rank-and-file of both organizations, providing the overarching goal behind their aspiration to power. The book examines five components of these efforts: A renewal of politics and government, the establishment of a new economic order, a revaluation of gender and familial relations, the role of youth in the new socio-political construct, and the politics of exclusion inherent in every facet of Faisceau and CDF doctrine. In so doing it contributes to a historical understanding of the programmatic elements of the interwar extreme-right, while simultaneously situating its most prominent exponents within their broader historical context.

Contents: Introduction; Vers un ordre politique nouveau: renovating state and government; Vers un ordre économique nouveau: the traditional and the modern in the new economy; La politique du foyer: the role of women and the family in the national community; Health, virility and patriotism: the physical and moral transformation of youth; The politics of exclusion: Jews and foreigners in the new nation and state; Conclusion; Bibliography; Index.

Dr Samuel Kalman is based in the Department of History at St Francis Xavier University, Canada

’Samuel Kalman's new book is a welcome change from most studies of the French nationalist movements in the first decades of the 20th century. The reason is simple: while the majority of scholars focus on the history and organisation of those groups to determine whether they fit into the controversial Fascist� category, Kalman takes an empirical approach and looks at their programmes and ideology without confining his research to the never-ending debate on the elusive Fascist� label... All in all, this book is innovative and helps us understand how these two movements, although they ultimately failed, helped shape the doctrines of the Vichy regime and, one may add, that of the French extreme right up to the days of the Front National.’ Searchlight ’Thoroughly researched and gracefully written, this book makes a distinct and valuable contribution to the historiography of the French far right.’ Canadian Journal of History ’Kalman’s new, well-researched monograph complements previous analyses of the extreme Right in interwar French politics by focussing on the largest and most influential of such groups in the 1920s and 1930s, the Faisceau and the Croix de Feu.’ American Historical Review ’Kalman’s comparative study is well-researched, detailed and informative. It successfully demonstrates how two of the largest extreme-rightist movements in interwar France had clear plans for the renovation of the state and how opposing ideologies co-existed within them. It is sound and well thought-out and offers an original contribution which both scholars and students will wish to read.’ French History '... Kalman's work is a stimulating account, which skilfully traces the lines of continuity between earlier thinkers and incarnations of the extreme right and their hugely successful interwar descendants, while exposing a complex and factionalized nature. It moves the study of the French interwar extreme right away from the debate on fascism and there

The Extreme Right in Interwar France: The Faisceau and the Croix de Feu