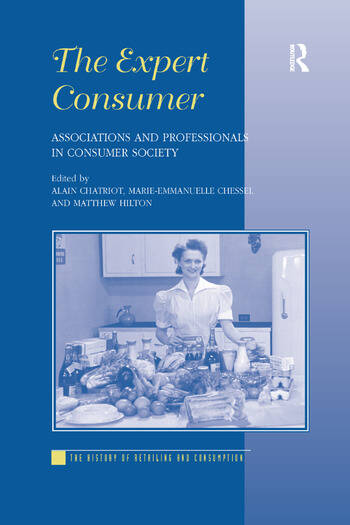 The Expert Consumer: Associations and Professionals in Consumer Society

Recent work has focused on the politics of consumption and its manifestation in a number of situations. This volume extends these debates, providing a tighter focus and contributing to a noticeable gap in the field that numerous scholars are beginning to turn towards: that is, organizations of consumers themselves who have chosen to speak for all consumers and similar such bodies of experts which act on behalf of consumers. The volume is fortunate in drawing upon a number of scholars who are about to publish major works on the subject, but who are happy to provide summary versions of their work for the volume. The book pays particular attention to specific moments in consumer mobilization and expertise, capturing the range of types of expert consumers across the twentieth century, from ethical consumer groups at the beginning, to intellectuals, housewives, economists and public officials. It addresses questions on the nature of consumer organizing, which bodies can speak for consumers, whether one consumer voice can ever be identified and the relationship between consumption and citizenship. Overview pieces demonstrate the larger narratives involved in the study of the expert consumer, whilst more comparative essays set out the nature of transatlantic exchanges. Other contributions point to the similarities across seemingly different consumption regimes, while case studies of specific organisations and key historical moments draw out the particularities of consumer expertise.

Contents: Introduction, Alain Chatriot, Marie-Emmanuelle Chessel and Matthew Hilton. Part 1 Early Consumer Activism: 'Through the medium of their pockets': sabbatarianism, free produce, non-intercourse and the significance of 'early modern' consumer activism, Lawrence B. Glickman; The moral expertise of the British consumer, c. 1900: a debate between the Christian Social Union and the Webbs, Julien Vincent; Consumers' leagues in France: a transatlantic perspective, Marie-Emmanuelle Chessel. Part 2 Consumer Expertise in War and Peace: Educating consumers, representing consumers: reforming the marketplace through scientific expertise at the Bureau of Home Economics, United States Department of Agriculture, 1923-40, Carolyn M. Goldstein; The enemy within: food, nutrition experts and consumers in French-speaking Switzerland, 1900-46, JoÃ«lle Droux; Shopping for an 'economic miracle': gendered politics of consumer citizenship in divided Germany, Katherine Pence. Part 3 Consumers in the Society of Consumption: Consumers' Associations and the state: protection and defence of the consumer in France, 1950-2000, Alain Chatriot; Shopping for the 'people's home': consumer planning in Norway and Sweden after the Second World War, Iselin Theien; The entrepreneurial ethic and the spirit of consumerism: finances and strategy in the US consumer movement, Robert N. Mayer; Living in the city differently: the birth of new expertise in France in the 1960s and 1970s, Odile Join-Lambert and Yves Lochard; The organised consumer movement since 1945, Matthew Hilton. Index.

’Drawing substantially on primary research, the book provides a tantalizing insight into multiplicity of forms of consumer representation in the nineteenth and twentieth centuries...’ Journal of Design History ’The Expert Consumer is a valuable book that should be of particular interest to American readers who want to learn about developments in Western Europe.’ Business History Review

The Expert Consumer: Associations and Professionals in Consumer Society