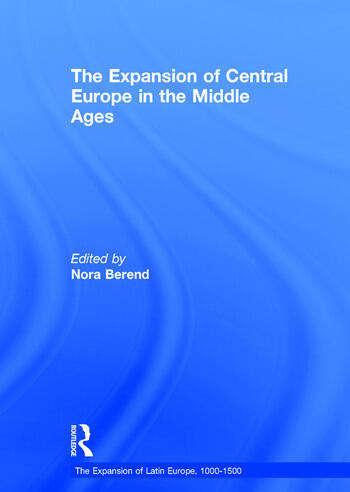 The Expansion of Central Europe in the Middle Ages

This volume brings together a set of key studies on the history of medieval Central Europe (Bohemia, Hungary, Poland), along with others specially commissioned for the book or translated, and a new introduction. This region was both an area of immigration, and one of polities in expansion. Such expansion included the settlement and exploitation of previously empty lands as well as rulers' attempts to incorporate new territories under their rule, although these attempts did not always succeed. Often, German immigration has been prioritized in scholarship, and the medieval expansion of Central Europe has been equated with the expansion of Germans. Debates then focused on the positive or negative contribution of Germans to local life, and the consequences of their settlement. This perspective, however, distorts our understanding of medieval processes. On the one hand, Central Europe was not a passive recipient of immigrants. Local rulers and eventually nobles benefited from and encouraged immigration; they played an active role. On the other hand, German immigration was not a unified movement, and cannot be equated with a drang nach osten. Finally, not just Germans, but also various Romance-speaking and other immigrant groups settled in Central Europe. This volume, therefore, seeks to present a more complex picture of medieval expansion in Central Europe.

Contents: Introduction; Part I The Question of German Expansion and Colonization in Central Europe: Medieval German expansion in Bohemia and Poland, James Westfall Thompson; The settlement and colonization of Europe, Richard Koebner; Medieval agrarian society in its prime: the lands east of the Elbe and German colonization eastwards, Hermann Aubin; The expansion of Germany: colonization and conquest in the East, Geoffrey Barraclough; German town foundations in Western Pomerania, Walter Kuhn; Slavs and Germans, Frantisek Graus; The German settlement in Central and Eastern Europe during the high Middle Ages, Martyn Rady; The medieval colonization of Central Europe as a problem of world history and historiography, Jan M. Piskorski. Part II Bohemia: The Germans and the implantation of German law among the Bohemians and Moravians in the Middle Ages, Josef Zemlicka; At the margin of community: Germans in pre-Hussite Bohemia, Leonard E. Scales; Germans and Slavs in 13th-century Bohemia: some preliminary remarks on immigrants and law, Lisa Wolverton. Part III Hungary: Immigrants and locals in medieval Hungary: 11th-13th centuries, Nora Berend; Foreign knights and clerks in early medieval Hungary, Erik Fugedi and JÃ nos M. Bak; The expansions of the kingdom of Hungary in the Middle Ages (1000-1490), Attilla BÃ¡rÃ¡ny. Part IV Poland: German settlement in Poland, Marian Z. Jedlicki; The medieval 'colonization of the East', Jan M. Piskorski; Foreign colonization and introduction of German law in the 13th century, Aleksander Gieysztor; Nationality conflicts in the German-Slavic borderland in the 13th-14th centuries and their social scope, Benedykt Zientara; Economic and political institutions on the Polish-German frontier from the Middle Ages: action, reaction, interaction, Paul Knoll; Pomerania and Poland in the 10th to 12th centuries: The expansion of the Piasts and the shaping of political, social and state relations in the seaside Slav communities, Stanislaw Rosik; Index.

Dr Nora Berend is a University Senior Lecturer in History and Fellow of St Catherine's College, University of Cambridge, UK.

The Expansion of Central Europe in the Middle Ages