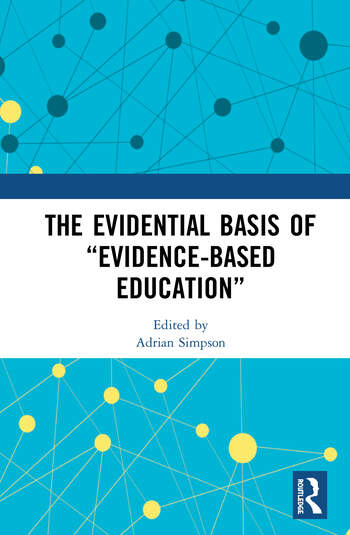 The Evidential Basis of “Evidence-Based Education”

"Evidence-based education" (EBE) is a catchline for policy makers and school leaders alike, with its advocates promoting their work as being "rigorous" and "scientific". The chapters in this book, written by leading educators and philosophers, place this approach in context and challenge whether the arguments it leads to live up to the hype.

EBE advocates promote particular, restricted approaches to determining policy and practice in schools, with only some forms of evidence accepted as legitimate. Experimental methods designed for the well-controlled environments of science and medicine in which subjects and treatments can be isolated are nonetheless promoted as ‘the gold standard’ even when transposed to complex social situations of interacting teachers and learners. This book explores some of the problems with this approach. It examines the background to disputes about evidence, the reasons EBE arguments have become so powerful in modern bureaucracies, the way practitioners might reason using evidence and the concerns about key notions of rigour, science, representativeness and effect size, which are often mistakenly interpreted in EBE.

The chapters in this book were originally published in a special issue of the journal, Educational Research and Evaluation.

An Introduction to the evidential basis of "evidence-based education"

1. Evidence of confusion about evidence of causes: comments on the debate about EBP in education

3. The key role of representativeness in evidence-based education

4. What is meant by "rigour" in evidence-based educational policy and what’s so good about it?

5. For whom does "what works" work? The political economy of evidence-based education

8. Some reflections on the role of evidence in improving education

Adrian Simpson is The Principal of Josephine Butler College and Professor of Mathematics Education at Durham University. His main interests are the school–university transition, proof and reasoning, and evidence for practice in education.

The Evidential Basis of “Evidence-Based Education”