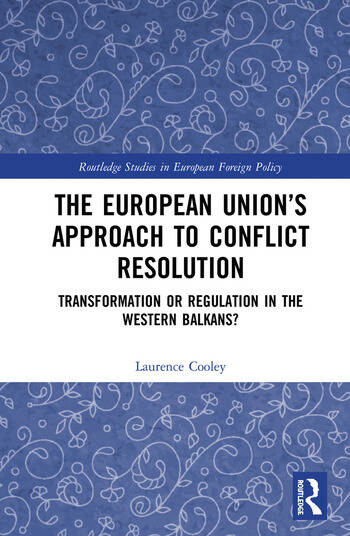 The European Union’s Approach to Conflict Resolution: Transformation or Regulation in the Western Balkans?

This book investigates and explains the European Union’s approach to conflict resolution in three countries of the Western Balkans: Bosnia and Herzegovina, Macedonia and Kosovo. In doing so, it critically interrogates claims that the EU acts as an agent of conflict transformation in its engagement with conflict-affected states. The book argues, contrary to the assumptions of much of the existing literature, that rather than seeking the transformation of conflicts, the EU pursues a more conservative strategy based on the regulation of conflict through the promotion of institutional mechanisms such as consociational power sharing and decentralisation.

Drawing on discourse analysis of documents, speeches, and interviews conducted by the author with European Union officials and policy-makers in Brussels and the case-study countries, the book offers a theoretically grounded, methodologically rigorous and empirically detailed analysis of EU policy preferences, of the ideas that underpin them, and of how those preferences are legitimised.

This book will be of key interest to scholars, students and practitioners interested in ethnic conflict and conflict resolution, the politics of the Balkans, and the external and foreign policies of the EU.

2. The EU and Approaches to Conflict Resolution

3. Bosnia and Herzegovina: (Not) Reforming an Ideal-Typical Consociation

4. Macedonia: Constitutional Engineering in a Time of Crisis

Laurence Cooley is a Research Fellow in the International Development Department at the University of Birmingham, UK. His research interests include the design of power-sharing institutions, the politics of the census in deeply divided societies, and the external policies of the European Union.

The European Union’s Approach to Conflict Resolution: Transformation or Regulation in the Western Balkans?