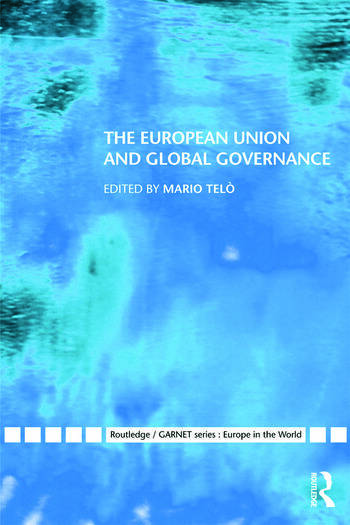 The European Union and Global Governance

This book explores and analyses the multidimensional influence the European Union exerts in the world, focusing on its contribution to regional and global governance.

Presenting a multidisciplinary approach with contributions by a panel of outstanding scholars from political science, economics, legal studies, philosophy and history, the book examines the EU as global player and international power in the making. The book is divided into three parts:

The European Union and Global Governance will be of vital interest to students and scholars of European Politics, International Relations, and European Studies.

1. Introduction: The EU as a model, a global actor and an unprecedented power M. Telo  Part 1: The impact of the European Union on global governance  2. The influence of European Union democracy P. Magnette and K. Nicolaidis  3. The international projection of the Euro and the international monetary system Jean-Victor.Louis  4. EU competition policy in a global world Mathias Dewatripont and Patrick Legros  5. The European socio-economic model and its implications on the global economy M.J.Rodrigues  Part 2: EU external policies  6. The EU’s external relations and their legal framework M.Dony  7. The EU Common Commercial Policy and global/regional regulation P.Conconi  8. The European common development cooperation Nico Schijver  9. The role of the European Union in global environmental and climate governance S. Oberthür  10.The external dimension of the European Area for Freedom, Security and Justice A. Weyembergh and Ph De Bruycker  11. The CFSP and ESDP E. Remacle and B.Delcourt  Part 3: Europe as a global actor: horizontal issues  12. The Neighbourhood policies of the EU R. Seidelmann  13. The EU, interregionalism and the global governance F.Ponjaert and S.Santander  14. Europe in the world: imperial legacies P.Lagrou  15. European integration and the cosmopolitan way J.M. Ferry

"Everything you need to know and more about the European Union’s role as a global actor appears in this rich collection of essays.  The volume provides insights from multiple disciplines into what the EU does, how it does it, why it does it, and where it succeeds or fails in a vast range of  areas.  The authors are among the best scholars of the EU, lending great credit to the institution to which most are attached, the Université Libre de Bruxelles".

"The European Union and Global Governance is an admirably comprehensive volume about the EU's intricate relationship with structures and processes of global governance. It covers a wide range of policy- and issue-areas, including monetary policy, foreign and defence policy, environmental policy, competition regulation, trade policy, and immigration policy. The contributors illustrate the EU's actual and potential impact on global governance, but also the constraints and limits to that influence. Tensions between the regional and multilateral levels of governance are laid out, and the challenges facing the EU such as promoting IMF reform or mitigating climate change are presented without minimizing the enormity of the tasks ahead".

"Professor Telò and his colleagues provide a grand illumination of one of the central issues of world politics in this era of change, namely the emerging role of the European Union has a provider of global governance. The chapters offer impressive insights into the ways and means of EU leadership in a wide range of realms. The result is a portrait of the EU on the world stage that will surprise and enlighten students and experts alike."

The European Union and Global Governance