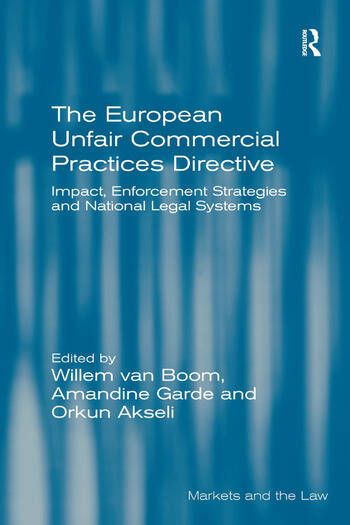 One of the most important EU consumer protection directives of the past decade, the 2005 Unfair Commercial Practices Directive, or UCPD, is brought under examination in this stimulating volume. Bringing together leading experts in the comparative law and consumer law domain, the book discusses the impact of the Directive and whether the many possible issues identified at its inception have been borne out in practice. Divided into four parts of 'Implementation, Approximation and Harmonization', 'Vulnerability', 'The UCP Directive and Other Regimes', and finally 'Enforcement', the volume examines the various policy developments, the growing body of case law, the decisions of relevant national enforcement authorities, as well as the legislative debates which have surrounded the implementation of the UCPD in Member States. This book provides a valuable assessment of the impact of a major EU directive almost ten years after its adoption, and as such will be of interest to academics, legal practitioners and the judiciary working in the areas of European and Consumer law.

Willem van Boom is a professor of law at Leiden University , the Netherlands. Van Boom's current research interests include contracts, torts and insurance, consumer law and civil procedure. While a traditional lawyer by education, Van Boom has a keen interest in private law ’in the real world’. In some of his recent publications, he attempts to gain a better understanding of how private law rules and dogmas impact on behaviour. He does so by combining insights from comparative law, law and economics and social sciences. Van Boom is part-time judge at the The Hague Court of Appeal. Moreover, he is an independent member of the Consumer Affairs Committee of the Social and Economic Council of the Netherlands. Amandine Garde is Professor Law, Liverpool University, UK. Her research interests lie in the fields of EU trade, consumer, advertising, food and public health law. She specialises more specifically on the role which regulation and litigation can play in improving public health and the wellbeing of children as a group of particularly vulnerable consumers. Amandine Garde has been involved in several policy initiatives, not least for the World Health Organisation, the European Commission, the UK and the Scottish Governments, and she regularly lends her advice to public health and consumer organisations in the UK, mainland Europe and North America. She is a qualified solicitor. Dr. Orkun Akseli is Senior Lecturer in Commercial Law at Durham Law School. Before embarking on academic life he practiced insurance defence and commercial litigation in Turkey. He is a member of the Turkish Bar. His research interests are in the corporate and commercial field with particular emphasis on harmonisation of secured transactions laws and facilitation of credit. He is the author of 'International Secured Transactions Law: Facilitation of Credit, International Conventions and Instruments'; co-editor (with Professor Joanna Gray) of 'Financial Regulation in Crisis? The Role of L

'As the Unfair Commercial Practices Directive has had a profound impact on consumer law across Europe, a stock-taking of its effects is urgently needed. Such an assessment is offered by this book. It contains a convincing analysis of key issues like vulnerability, the relationship to other regimes and enforcement.' Thomas Wilhelmsson, Chancellor of the University of Helsinki, Finland ’This book does an excellent job in picking out the principal tensions, challenges and evolving practices associated with Directive 2005/29 on unfair commercial practices, an intriguing measure which seeks to establish a common European understanding of unfairness� while also closing off the possibility of EU Member States choosing to apply stricter standards.’ Stephen Weatherill, Oxford University, UK ’The 2005 Unfair Commercial Practices Directive is a watershed in EU regulation of consumer markets. This book, written by experts in EU consumer law, provides insightful and incisive analyses of the emerging policy questions, issues of interpretation and debates on enforcement encountered in the implementation of the Directive throughout the EU.’ Iain Ramsay, University of Kent, UK ’This volume offers a timely analysis of the experience with the Unfair Commercial Practices and its full harmonisation character several years after it has come into force. It provides a welcome scholarly discussion of many of the post-implementation challenges which have been identified and provides interesting observations for the future development of this area of law.’ Christian Twigg-Flesner, University of Hull, UK