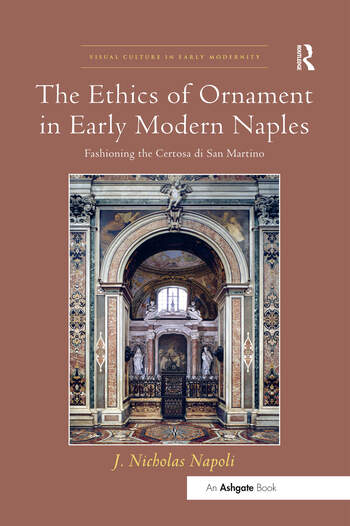 The Carthusian monks at San Martino began a series of decorative campaigns in the 1580s that continued until 1757, transforming the church of their monastery, the Certosa di San Martino, into a jewel of marble revetment, painting, and sculpture. The aesthetics of the church generate a jarring moral conflict: few religious orders honored the ideals of poverty and simplicity so ardently yet decorated so sumptuously. In this study, Nick Napoli explores the terms of this conflict and of how it sought resolution amidst the social and economic realities and the political and religious culture of early modern Naples. Napoli mines the documentary record of the decorative campaigns at San Martino, revealing the rich testimony it provides relating to both the monks’ and the artists’ expectations of how practice and payment should transpire. From these documents, the author delivers insight into the ethical and economic foundations of artistic practice in early modern Naples. The first English-language study of a key monument in Naples and the first to situate the complex within the cultural history of the city, The Ethics of Ornament in Early Modern Naples sheds new light on the Neapolitan baroque, industries of art in the age before capitalism, and the relation of art, architecture, and ornament.

Contents: Introduction; Ornament as social virtue: the theory of magnificence from the Duke of Calabria to Severo Turboli; Sanctioned on earth as in the annals of eternity: celebrating Carthusian humility; Justice: nurturing personal and professional trust between patrons and artists; Industry: the enterprise of Cosimo Fanzago in early modern Naples; Towards an enlightened piety; Conclusion; Appendices; Bibliography; Index.

J. Nicholas Napoli has taught history of art and architecture at the University of York, University of Virginia, and Pratt Institute. He has contributed articles on Renaissance and Baroque art and architecture to 'Art History', 'Napoli Nobilissima', and 'Memoirs of the American Academy in Rome'. Nick lives in Brooklyn, and is currently an M.Arch candidate at City College of New York and works with System Architects in New York.

'This book explores the decoration of the Carthusian monastic complex of San Martino and considers it in relation to Carthusian identity and institutional ideals. It benefits from a good deal of new archival material. It will be of particular interest to specialist scholars on baroque art and architecture, patronage, and of early modern Naples. Its publication coincides with a renewed scholarly interest in Naples and also with a currently fashionable concern with "the business of art".' Helen Hills, University of York, UK, and Co-founder of Neapolitan Network

'The Ethics of Ornament is an intelligent, comprehensive, and highly useful study of the use and meaning of ornament in ecclesiastical art and architecture during this remarkable period of artistic and architectural productivity in Naples.' Vernon H. Minor, University of Illinois, Urbana-Champaign, USA