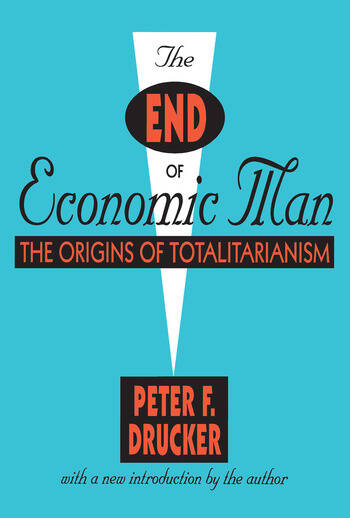 The End of Economic Man: The Origins of Totalitarianism

In The End of Economic Man, long recognized as a cornerstone work, Peter F. Drucker explains and interprets fascism and Nazism as fundamental revolutions. In some ways, this book anticipated by more than a decade the existentialism that came to dominate the European political mood in the postwar period. Drucker provides a special addition to the massive literature on existentialism and alienation since World War II. The End of Economic Man is a social and political effort to explain the subjective consequences of the social upheavals caused by warfare.

Drucker concentrates on one specific historical event: the breakdown of the social and political structure of Europe which culminated in the rise of Nazi totalitarianism to mastery over Europe. He explains the tragedy of Europe as the loss of political faith, resulting from the political alienation of the European masses. The End of Economic Man is a book of great social import. It shows not only what might have helped the older generation avert the catastrophe of Nazism, but also how today's generation can prevent another such catastrophe. This work will be of special interest to political scientists, intellectual historians, and sociologists.

The book was singled out for praise on both sides of the Atlantic, and is considered by the author to be his most prescient effort in social theory.

2. The Despair of the Masses

3. The Return of the Demons

4. The Failure of the Christian Churches

8. The Future: East Against West

The End of Economic Man: The Origins of Totalitarianism