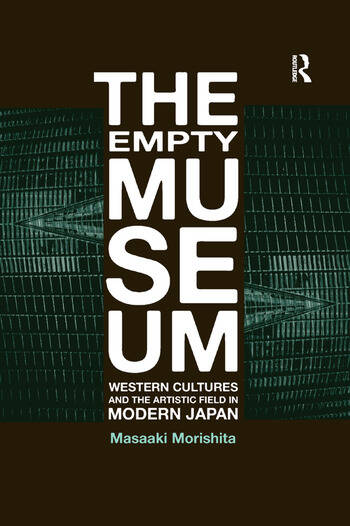 The Empty Museum: Western Cultures and the Artistic Field in Modern Japan

This book examines the processes through which public art museums, as modern Western institutions, were introduced to Japan in the late nineteenth century and how they subsequently developed distinctive national characteristics. The author focuses on one of the most distinctive forms of Japanese museums: the 'empty museums' - museums without collections, permanent displays, and curators. Morishita shows how they developed, in relation to social and cultural conditions at certain periods in modern Japanese history, by engaging with a wide range of interdisciplinary theories, in particular, Pierre Bourdieu's field theory and the conceptual framework of transculturation. Japan is used as a case study to show in general terms how the elements of modern Western culture associated with public art museums were introduced and transformed in the local conditions of non-Western regions. With its unique empirical cases and theoretical focus, the book makes a significant contribution to existing literature in the field of museum studies, both in the English-speaking world and in Japan, and will be of interest to scholars and students of sociology, art history, cultural studies and Japanese studies.

Contents: Preface; Introduction; Transculturation and Bourdieu's field theory; The early development of the field of Bijutsu: the Bunten and the art group; The birth of the regional art museum: art groups and the avant-garde; Post-war development: curators and museums of modern art; Struggles between the local artist and the curator; Conclusion; Appendix; Bibliography; Index.

Masaaki Morishita is a Project Coordinator at the Ritsumeikan Asia Pacific University, Japan and a Visiting Researcher at the National Research Institute for Cultural Properties, Tokyo, Japan.

'This excellent work promises a new way of thinking about Museology, as well as injecting a welcome non-Eurocentric line of argument. The approach that "the emptiness of the Museum represented, not a failure of Westernisation but a process of transculturation" is very rewarding.' Timon Screech, University of London, UK 'This important and scholarly work, engages with transculturalism as outlined by Ortiz and Bourdieu’s field theory to discuss the birth of the "empty" (temporary exhibition) - art museum in Japan. Although centering on developments in Tokyo, Morishita’s richly illustrated book, dealing with the complex struggles between agents in the contemporary world, will interest students of museum studies in general.' Viv Golding, University of Leicester, UK '... commendably lucid and very well researched study of art museums in Japan... Morishita gives us fascinating insights into internal art politics in museums in Japan, exemplified by the long battle over many years for control and authority between the curators and artists in his case study of the Tochigi Prefectural Museum of Fine Arts... Morishita's book is [...] a most significant contribution to museum and art studies about Japan, and to museology internationally, in revealing the way that Japanese art museums have adapted Western models to suit their own society.' reCollections 'Morishita does not present comparative discussions of Japanese versus the Western art museum models. Instead, the author offers an English language audience important insights into the evolution of the nation's cultural and museological history through the experience and opinion of key institutional and art group figures.' Asia Pacific World

The Empty Museum: Western Cultures and the Artistic Field in Modern Japan