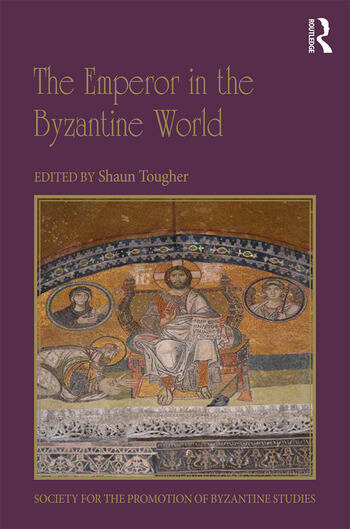 The Emperor in the Byzantine World: Papers from the Forty-Seventh Spring Symposium of Byzantine Studies

The subject of the emperor in the Byzantine world may seem likely to be a well-studied topic but there is no book devoted to the emperor in general covering the span of the Byzantine empire. Of course there are studies on individual emperors, dynasties and aspects of the imperial office/role, but there remains no equivalent to Fergus Millar’s The Emperor in the Roman World (from which the proposed volume takes inspiration for its title and scope). The oddity of a lack of a general study of the Byzantine emperor is compounded by the fact that a series of books devoted to Byzantine empresses was published in the late twentieth and early twenty-first centuries. Thus it is appropriate to turn the spotlight on the emperor.

The volume fills a need in the field and the market, and also brings new and cutting-edge approaches to the study of the Byzantine emperor. Although the volume cannot hope to be a comprehensive treatment of the emperor in the Byzantine world it aims to cover a broad chronological and thematic span and to play a vital part in setting the agenda for future work. The subject of the Byzantine emperor has also an obvious relevance for historians working on rulership in other cultures and periods.

Note on Spelling of Names

1. Mark Humphries Family, dynasty, and the construction of legitimacy from Augustus to the Theodosians

2. Mike Humphreys The shifting importance of dynasty in Heraclian ideology

5. Meaghan McEvoy Celibacy and survival in court politics in the fifth century AD

6. Jonathan Shepard The emperor’s ‘significant others’:

Alexios I Komnenos and his ‘Pivot to the West’

Section III: The Emperor as Ruler: Duties and Ideals

8. Bernard H. Stolte ‘Law is king of all things’? The emperor and the law

9. Frank R. Trombley and Shaun Tougher The emperor at war: Duties and ideals

12. Prerona Prasad Splendour, vigour, and legitimacy: The prefaces of the Book of Ceremonies (De cerimoniis) and Byzantine imperial theory

13. Nikolaos G. Chrissis Ideological and political contestations in post-1204 Byzantium: The orations of Niketas Choniates and the imperial court of Nicaea

15. Alicia Walker The emperor at the threshold: Making and breaking taxis at Hagia Sophia

16. Lynn Jones Taking it on the road: The palace on the move

Shaun Tougher is Reader in Ancient History at Cardiff University. He specialises in late Roman and Byzantine political and social history. His publications include The Reign of Leo VI (886–912) (1997), Julian the Apostate (2007), The Eunuch in Byzantine History and Society (2008), Emperor and Author: The Writings of Julian the Apostate (2012, co-edited with Nicholas Baker-Brian), and Approaches to the Byzantine Family (2013, co-edited with Leslie Brubaker). He is a Series Editor for Palgrave Macmillan’s New Approaches to Byzantine History and Culture.

The Emperor in the Byzantine World: Papers from the Forty-Seventh Spring Symposium of Byzantine Studies