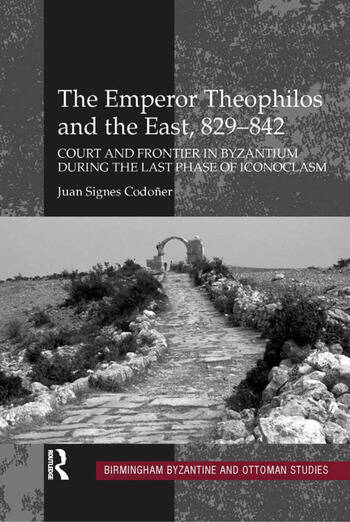 The Emperor Theophilos and the East, 829–842: Court and Frontier in Byzantium during the Last Phase of Iconoclasm

Modern historiography has become accustomed to portraying the emperor Theophilos of Byzantium (829-842) in a favourable light, taking at face value the legendary account that makes of him a righteous and learned ruler, and excusing as ill fortune his apparent military failures against the Muslims. The present book considers events of the period that are crucial to our understanding of the reign and argues for a more balanced assessment of it. The focus lies on the impact of Oriental politics on the reign of Theophilos, the last iconoclast emperor. After introductory chapters, setting out the context in which he came to power, separate sections are devoted to the influence of Armenians at the court, the enrolment of Persian rebels against the caliphate in the Byzantine army, the continuous warfare with the Arabs and the cultural exchange with Baghdad, the Khazar problem, and the attitude of the Christian Melkites towards the iconoclast emperor. The final chapter reassesses the image of the emperor as a good ruler, building on the conclusions of the previous sections. The book reinterprets major events of the period and their chronology, and sets in a new light the role played by figures like Thomas the Slav, Manuel the Armenian or the Persian Theophobos, whose identity is established from a better understanding of the sources.

Contents: Preface; Introduction. Section I Prolegomena to a Reign: Internal Conflict in the Empire under Leo V and Michael II: Back to iconoclasm!; Unrest at the eastern border. Section II The Armenian Court: Family ties: Leo the Armenian and Michael of Amorion; Parties at the court: the Armenian marriage of Theophilos; The elusive Manuel the Armenian; The daughter of Constantine VI and her stepson; The Armenian family network; Opposition to the emperor. Section III Supporting the Persian Uprising Against the Abbasids: Some remarks on the Khurramite movement; Naá¹£r the Khurramite; Theophobos and his father; A Persian Basileus? Section IV Warfare Against the Arabs: Invasion or civil war? Thomas the Slav and the Arabs; Campaigning in Cilicia and Cappadocia in 830-833; Byzantine expeditions in Western Armenia between 834 and 836; The second triumph of Theophilos in 837; Theophilos’ defeat at Anzes and the capture of Amorion in 838; After Amorion: Theophilos’ last years. Section V The Khazar Flank: The embassy to the Khazars and the building of Sarkel; Rus, Slavs and Bulgars in the steppes. Section VI The Melkites: The letter of the three Melkite patriarchs to Theophilos; Apocalyptics and expectations of political change in the realm of the Abbasids. Section VII Cultural Exchange with the Arabs: Some preliminary matters; A bidirectional exchange? Epilogue: the image of Theophilos as a ruler; A chronology of Theophilos’ reign; Abbreviations; Sources, Bibliography; Index.

Juan Signes CodoÃ±er is Professor of Greek Philology at the University of Valladolid, Spain. He has a particular interest in Byzantine history of the 9th century and in the historical literature of Byzantium. With Michael Featherstone he is publishing a new edition of Theophanes Continuatus (in the Corpus fontium historiae Byzantinae, series Berolinensis), and amongst his many articles is one related to the present volume, ’Melkites and Icon worship during the iconoclastic period’, appearing in Dumbarton Oaks Papers.

'The volume is a tour de force in its integrated provision of a vast amount of relevant source material and detailed analysis of it. Numerous conclusions of other modern historians are subjected to detailed scrutiny and evidentiary tests. ... the volume is a fascinating methodological achievement and provides a valuable, if occasionally tendentious, reappraisal of Theophilos’ eastern policy and military accomplishments.' Bryn Mawr Classical Review

The Emperor Theophilos and the East, 829–842: Court and Frontier in Byzantium during the Last Phase of Iconoclasm