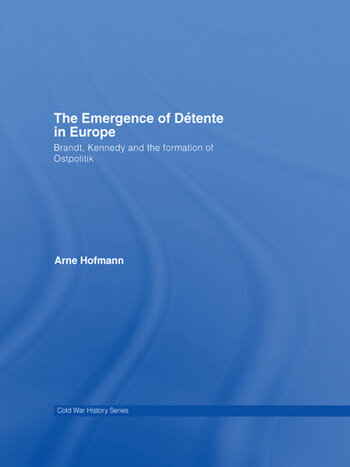 The Emergence of Détente in Europe: Brandt, Kennedy and the Formation of Ostpolitik

This book examines the key relationship between Willy Brandt (the former Mayor of West Berlin and future West German Chancellor) and the administration of President John F. Kennedy.

Arne Hofmann focuses on the administration’s influence on the development of Brandt’s ‘policy of small steps’ and the formation of his later Ostpolitik, the centrepiece of European détente. Brandt’s interaction with the Kennedy administration is traced through the Berlin Wall crisis of 1961, together with Kennedy’s search for a modus vivendi based on the status quo, the 1962 crisis in German-American relations, Brandt’s disillusionment campaign, the development of his programmatic statements, Brandt’s three meetings with the President including Kennedy’s famous visit to Berlin, the limited nuclear test ban treaty and Brandt’s Berlin pass agreement of Christmas 1963. While the narrative focuses on the gradual change in Brandt’s position, systematic parts concentrate on Brandt’s and Kennedy’s détente concepts, the triangular relationship between West Berlin, Washington and Bonn with its implication for domestic politics, and the role of images, campaigning and public opinion.

The Emergence of Détente in Europe will appeal to students of Cold War history, foreign policy, international relations and international history in general.

Introduction  Part 1: Willy Brandt and John F. Kennedy, 1960–1963  1. ‘New Frontier’: From the Kennedy Campaign to the First Meeting, 1960 – March 1961  2. ‘Almost Like Brothers’?: The First Meeting Between the Mayor and the President, March 1961  3. ‘Essentials’?: From the First Meeting to the Berlin Wall  4. ‘Mending Wall’: Brandt, Kennedy, Johnson and the Berlin Wall  5. In Search of a Modus Vivendi: Willy Brandt and Kennedy’s Quest for a Berlin Agreement  6. From Crisis to Détente: The Autumn of 1962  7. ‘Nineteen Sixty-Three’: The Pinnacle of the Brandt–Kennedy Alliance and the First Steps Towards Détente  Part 2: Small Steps Towards New Frontiers? Values, Ideas, Concepts and the Emergence of a Détente Strategy  1. From World View to Détente Strategy: Coexistence, Transformation and Conceptual Concordance  2. The Intricacies of the Status Quo: Modes of Change and Conceptual Difference  3. Towards a New German Policy: Dealing with the East and Conceptual Adaptation  Part 3: Domestic and International Politics Between Berlin, Bonn and Washington  1. Playing the Triangle  2. Selling Candidates and Policies: Images, Campaigning and the Promotion of a New Policy.  Conclusion

Arne Hofmann has taught history and diplomacy at Queen Mary, University of London, King's College London and the LSE. His current interests lie in the international history of the West since 1945.

The Emergence of Détente in Europe: Brandt, Kennedy and the Formation of Ostpolitik