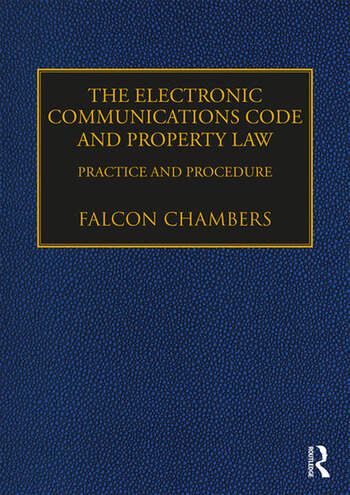 The Electronic Communications Code and Property Law: Practice and Procedure

This book describes the problems that accompanied the Old Code (which will continue to regulate existing installations and agreements); and the intended solutions under the New Code. The eminent team of authors explain the background, provisions and operation of the old code and the new one, providing practical and jargon-free guidance throughout. It is sure to become the reference on this topic and is intended as a guide for telecommunications operators, land owners, and of course for their advisers in the legal and surveying professions.

All members of Falcon Chambers, comprising nine Queen’s Counsel and 30 junior barristers, specialise in property law and allied topics, including the various incarnations of the Electronic Communications Code. Members of Falcon Chambers, including all the authors of this new work, have for many years lectured and written widely on the code, and have appeared (acting for both operators and landowners) in many of the few reported cases on the subject of the interface between property law and the code, including for example: Geo Networks Ltd v The Bridgewater Canal Co. Ltd (2010); Geo Networks Ltd v The Bridgewater Canal Co. Ltd (2011); Crest Nicholson (Operations) Ltd v Arqiva Services Ltd (2015); Brophy v Vodafone Ltd (2017).

The Electronic Communications Code 2003: an overview

Operators under the Old Code

Alteration and removal of apparatus under paragraph 20

Removal of apparatus under paragraph 21

What are code rights?

Who may confer code rights?

To whom may code rights be granted?

Over what may code rights be granted?

Consideration and compensation under the New Code

Matters common to both codes

Notices under the codes

Dispute resolution procedure under the codes

The position in Scotland

The role of OFCOM

The Electronic Communications Code and Property Law: Practice and Procedure