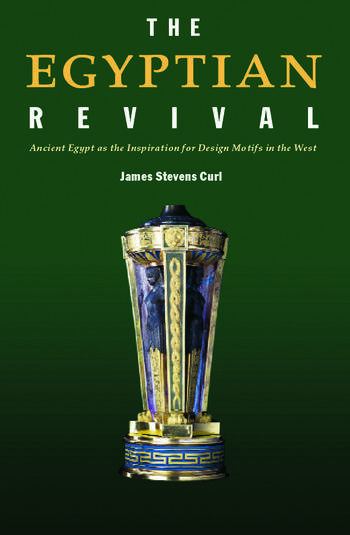 The Egyptian Revival: Ancient Egypt as the Inspiration for Design Motifs in the West

In this beautifully illustrated and closely argued book, a completely updated and much expanded third edition of his magisterial survey, Curl describes in lively and stimulating prose the numerous revivals of the Egyptian style from Antiquity to the present day. Drawing on a wealth of sources, his pioneering and definitive work analyzes the remarkable and persistent influence of Ancient Egyptian culture on the West.

The author deftly develops his argument that the civilization of Ancient Egypt is central, rather than peripheral, to the development of much of Western architecture, art, design, and religion. Curl examines:

For students of art, architectural and ancient history, and those interested in western European culture generally, this book will be an inspiring and invaluable addition to the available literature.

Professor Emeritus James Stevens Curl, has held Chairs in Architectural History at The Queen's University of Belfast and The School of Architecture, De Montfort University, Leicester. His many book include The Oxford Dictionary of Architecture and Landscape Architecture (2006), Classical Architecture (1992, 2002), and The Victorian Celebration of Death (2000, 2004).

'Its hard to imagine a more stimulating or comprehensive work on this subject' – Apollo: The International Magazine of Art and Antiquities

'Every book Curl writes is distinguished by his rare and compelling combination of passion and scholarship ... Curl's masterly book will be the definitive study of its subject for many years' – David Watkin, Professor of the History of Architecture at the University of Cambridge, UK

'fascinating and provocative' - The Architectural Review

' it is a book that all art historians, connoisseurs, artists, Egyptologists, and students can turn to for information, education, and also simply for delight.' - Minerva

'If you want to know anything about the Egyptian Revival, then here is the place to start.' - The Victorian

'The Egyptian Revival is a fantastic sourcebook. There is certainly no doubting the breadth of evidence collected by Professor Curl over the past four decades.' - Newsletter of the Society of Architectural Historians of Great Britain

' Curl is among the most productive of architectural historians writing today... Densely scholarly, with an extremely useful fifty-five page glossary and a sixty-one page bibliography, the book impresses with its depth of learning and deftness of connections.'  - The Antiquaries Journal

'Curl's study... is a revelation in text and graphics.' - Transactions of the Ancient Monuments Society

'a fascinating and thoroughly researched volume... Even if, like your reviewer, you have both of the earlier editions, do not ignore this latest version which is a revelation in text and illustration. - Stephen Croad, Transactions of the Ancient Monuments Society

The Egyptian Revival: Ancient Egypt as the Inspiration for Design Motifs in the West