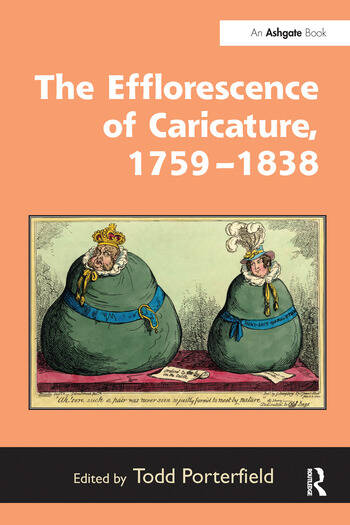 Searing disputes over caricature have recently sparked flames across the world”the culmination, not the beginning, of the story of one of modernity's definitive artistic practices. Modern visual satire erupts during a period marked by reform and revolution, by cohering nationalisms and expanding empires, and by the emerging discipline of art history. This has long been recognized as its Golden Age. It is time to look anew. In The Efflorescence of Caricature, 1759-1838, an international, interdisciplinary, and intergenerational team of scholars reconfigures the geography of modern visual satire, as the expansive narrative reaches from North America to Europe, to China and the Ottoman Empire. Caricature's specific visual cultures are also laid bare, its iconographic means and material support, as well as the diverse milieu of its making”the military, the art academy, diplomacy, politics, art criticism, and popular entertainment. Some of its greatest practitioners”James Gillray and Honoré Daumier”are seen in a new light, alongside some of their far flung and opportunistic pastichers. Most trenchantly, assumptions about the consequences of caricature's rise come under intense scrutiny, interrogated for its cherished and long-vaunted civilizational claims on individual character, artistic supremacy, political liberty, and global domination.

Todd Porterfield is Professor and Canada Research Chair in Art History at the Université de Montréal. He is the author of The Allure of Empire: Art in the Service of French Imperialism, 1798-1836 (1998), and co-author of Staging Empire: Napoleon, Ingres, and David (2006).

'As a collection of essays by multiple authors, The Effloresence of Caricature necessarily has it limitations. But that is to quibble. The best essays will provoke new studies that will explore further the international and interdisciplinary context in which caricature worked and must be studied.' Print Quarterly

'All the essays gathered here offer valuable insights into their chosen topics.' H-France