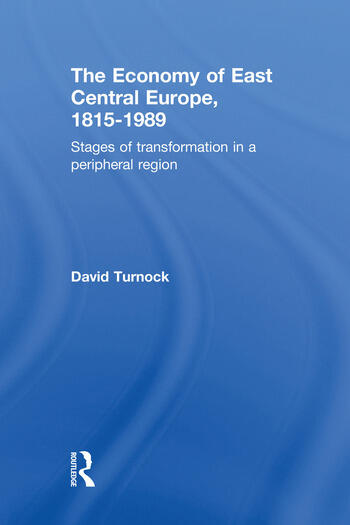 The Economy of East Central Europe, 1815-1989: Stages of Transformation in a Peripheral Region

From a widely published expert in the field, this major survey reviews two centuries of modernization and examines the dramatic changes in the economies of Eastern Europe.

Uniquely taking the broader historical picture into account, David Turnock brings together the entire scope of the modernization process, from the first phase of modern national development in the Balkans and the impact of imperial systems on the area as a whole, to the feeling of 'unfinished business' at the end of the Second World War. He continues up to the present-day state of transition, evaluating the contrasts in the region between the northern and southern states, domestic division between dynamic and backward areas, and the increasing emphasis on the opening up of frontier regions.

Wide in scope and including detailed and informative chronologies, this book will prove an invaluable asset to students of European history and economics.

The Economy of East Central Europe, 1815-1989: Stages of Transformation in a Peripheral Region