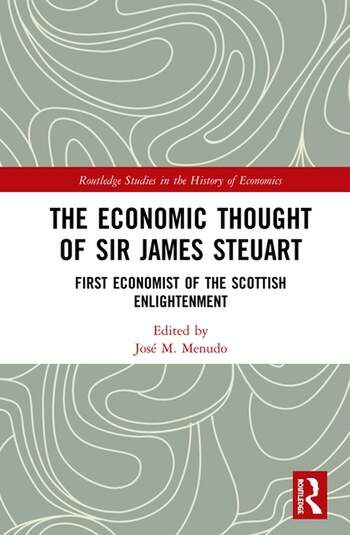 The Economic Thought of Sir James Steuart: First Economist of the Scottish Enlightenment

James Steuart published An Inquiry into the Principles of Political Œconomy in 1767, the first systematic treatise on economics, nine years before Adam Smith’s Wealth of Nations. Traditional historiography has tended to disregard and even deny Steuart’s oeuvre, categorizing him as the last, outdated advocate of mercantilist policies in Britain.

A clear portrait of a modernizing and enlightened Steuart emerges from this book, opening up an alternative approach to many key developments in economic theory. This book brings together a diverse international team of experts to overturn the "advocate of mercantilism" myth and explore different interpretations of Steuart’s work within the context of the writings of other contemporary authors. A diverse range of specialists – historians, economists, political scientist, and sociologists – reflecting the diversity of James Steuart’s work explore various aspects of the life, works, and influence of James Steuart, including his links to other authors who conceive – as Steuart did – the economic system of "natural liberty" as an artificial creation. The portrait of a demarginalized, modernizing, and enlightened Steuart emerges clearly in this book.

This book is not reduced to old authors whose ideas would be at the Museum of Dead Ideas, it has a very contemporary resonance. The subjects and the way Steuart tackles them could have a big influence on future authors who recognized some advantages of an alternative approach to many key developments in economic theory. This will also be of interest to scholars of history of economic thought, intellectual history, and 18th century history.

Part I: A Society Without Invisible Hands

5. The Notion of Political Economy in Steuart's and Smith's Main Works Francis Clavé

8. James Steuart: A Modern Approach to the Liquidity and Solvency of Public Debt Nesrine Bentemessek and Rebeca Gomez Betancourt

10. Determination of Prices in the Economic Theory of James Steuart From a Modern Classical Perspective Alexander Tobon

14. Steuart, Hegel, Chamley: A Case Upon the Nature of ‘Influence’ Gilles Campagnolo

The Economic Thought of Sir James Steuart: First Economist of the Scottish Enlightenment