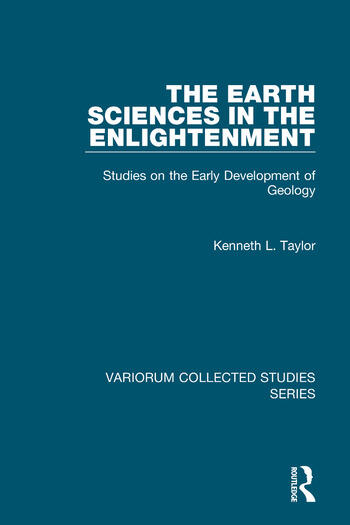 The Earth Sciences in the Enlightenment: Studies on the Early Development of Geology

This volume is concerned with the geological sciences in the 18th century, with special emphasis on France and French scientists. A first focus is on the pioneering geologist Nicolas Desmarest, whose investigations in Auvergne and Italy (among other places) had important consequences in geological theory and practice. Desmarest emerges as a figure of intriguing complexity and refined methodological convictions, defying facile interpretation in terms of, for instance, a simple polarity between vulcanism and neptunism. Widening his inquiry beyond Desmarest, Professor Taylor also endeavors to recover key elements of the presuppositions and thought-patterns of Enlightenment geologists, and to discern how geological investigation worked during this formative period. In the era that modern geological science was beginning to take form, many of the participants are seen as struggling to define their scientific objectives and procedures by drawing from the competing frameworks of physique or natural philosophy, descriptive natural history, and antiquarian scholarship or developmental history. One of the articles (Reflections on Natural Laws in Eighteenth-Century Geology) appears here for the first time in English.

Contents: Preface; A Key Figure in Enlightenment Geology: Nicolas Desmarest: Nicolas Desmarest and geology in the 18th century; The beginnings of a geological naturalist: Desmarest, the printed word and nature; Nicolas Desmarest and Italian geology; New light on geological mapping in Auvergne in the 18th century: the Pasumot-Desmarest collaboration; Buffon, Desmarest, and the ordering of geological events in Ã‰poques. Investigating and Understanding Terrestrial Phenomena: Natural law in 18th-century geology: the case of Louis Bourguet; Reflections on natural laws in 18th-century geology; The historical rehabilitation of theories of the Earth; Volcanoes as accidents: how 'natural' were volcanoes to 18th-century naturalists? 2 ways of imagining the Earth at the close of the 18th century: descriptive and theoretical traditions in early geology. The Emerging New Geological Science: Early geoscience mapping, 1700-1830; Geology in 1776: some notes on the character of an incipient science; The beginnings of a French geological identity; The Ã‰poques de la Nature and geology during Buffon's later years; Earth and Heaven, 1750-1800: enlightenment ideas about the relevance to geology of extraterrestrial operations and events; Index.

Kenneth L. Taylor is Professor Emeritus in the Department of the History of Science, The University of Oklahoma, USA.

’Clearly no review can do justice to the complex these outlined above. But I hope I have said enough to entice historians of geology to read any or all parts of this admirable collection.’ ISIS ’...un livre Ã  lire absolument, pour qui désire connaÃ®tre le contexte intellectuel dans lequel la géologie commenÃ§a Ã  émerger en France.’ Géochronique ’Taylor’s Variorum collection marks, in a sense, the culmination of a long and successful career in teaching and research. Yet this is his first book. This is perhaps surprising, and so too is the degree of specialisation evident in his publications. ... But out of Taylor’s markedly specialised studies have emerged various important generalisations about the emergence of geology, and broad ideas about the methods and goals of geologists in the eighteenth century. ... All in all, we have in Professor Taylor’s Variorum volume a valuable and coherent collection of papers, and a worthy testimony to his long years of meticulous and cautious study. ... The book is highly commended.’ Metascience ’L'ouvrage, dans l'esprit de cette collection, rend ainsi accessible un bon nombre d'articles jusque-lÃ  dispersés et constitue Ã  la fois un éclairage synthétique sur la géologie du XVIIIe et une invitation Ã  des lectures complémentaires.’ Revue d'Histoire des Sciences

The Earth Sciences in the Enlightenment: Studies on the Early Development of Geology