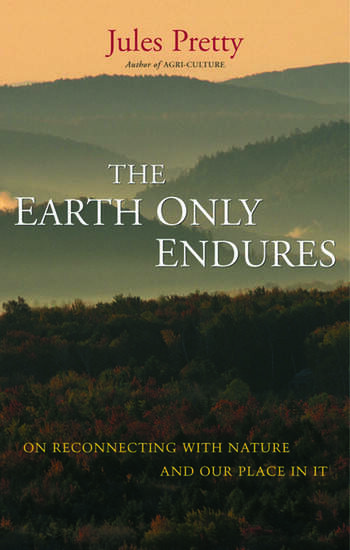 The Earth Only Endures: On Reconnecting with Nature and Our Place in It

For most of human history, we have lived our daily lives in a close relationship with the land. Yet now, for the first time, more people are living in urban rather than rural areas, bringing about an estrangement. This book, by acclaimed author Jules Pretty, is fundamentally about our relationship with nature, animals and places. A series of interlinked essays leads readers on a voyage that weaves through the themes of connection and estrangement between humans and nature. The journey shows how our modern lifestyles and economies would need six or eight Earths if the entire worlds population adopted our profligate ways. Pretty shows that we are rendering our own world inhospitable and so risk losing what it means to be human: unless we make substantial changes, Gaia threatens to become Grendel. Ultimately, however, the book offers glimpses of an optimistic future for humanity, in the very face of climate change and pending global environmental catastrophe.

Preface: Green Places, Good Places * Part I: Green Places * Becoming Green * Birch Bark and Blue Sky * A Room with a Green View * Unhealthy Places * Part II: Animals and Us * Where the Wild Things Were * Hunters and the Hunted * Animal Magic * Part III: Food and the Land * The Fatta the Lan * Little Houses on the Prairie * The Shadow of the Rain * Rewilding Agriculture * Part IV: People and the Land * Legible Landscapes * Exclusion Zones * Life and Land on the North Atlantic Fringe * Part V: The Future * Ecolution * Liberation * Index

Jules Pretty OBE is Professor of Environment and Society in the Department of Biological Sciences at the University of Essex, UK, and Chief Editor of the International Journal of Agricultural Sustainability. His books include Sustainable Agriculture and Food (4 vols, ed, 2007), Environment (4 vols, ed, 2006), The Earthscan Reader in Sustainable Agriculture (2005, ed), The Pesticide Detox (2005), Agri-Culture (2002), The Living Land (1998), Regenerating Agriculture (1995) and Unwelcome Harvest (1991, co-authored). He is a Fellow of the Institute of the Biology and the Royal Society of Arts, and Deputy-Chair of the government‘s Advisory Committee on Releases to the Environment (ACRE). He received a 1997 international award from the Indian Ecological Society and was appointed A. D. White Professor-at-Large by Cornell University from 2001. In 2006 he received an OBE for services to sustainable agriculture in the UK and overseas.

The Earth Only Endures: On Reconnecting with Nature and Our Place in It