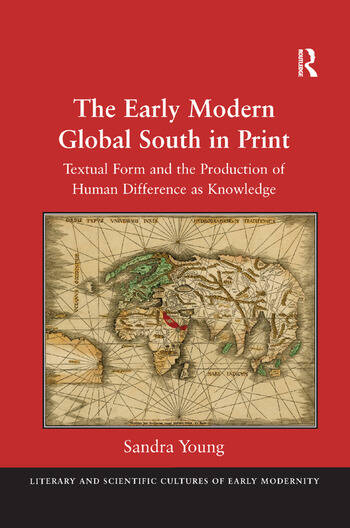 The Early Modern Global South in Print: Textual Form and the Production of Human Difference as Knowledge

Early modern geographers and compilers of travel narratives drew on a lexicon derived from cartography’s seemingly unchanging coordinates to explain human diversity. Sandra Young’s inquiry into the partisan knowledge practices of early modernity brings to light the emergence of the early modern global south. Young proposes a new set of terms with which to understand the racialized imaginary inscribed in the scholarly texts that presented the peoples of the south as objects of an inquiring gaze from the north. Through maps, images and even textual formatting, equivalences were established between ’new’ worlds, many of them long known to European explorers, she argues, in terms that made explicit the divide between ’north’ and ’south.’ This book takes seriously the role of form in shaping meaning and its ideological consequences. Young examines, in turn, the representational methodologies, or ’artes,’ deployed in mapping the ’whole’ world: illustrating, creating charts for navigation, noting down observations, collecting and cataloguing curiosities, reporting events, formatting materials, and editing and translating old sources. By tracking these methodologies in the lines of beauty and evidence on the page, we can see how early modern producers of knowledge were able to attribute alterity to the ’southern climes’ of an increasingly complex world, while securing their own place within it.

Table of contents to come.

Sandra Young is Senior Lecturer, and Convenor of the Masters Program, in the Department of English at the University of Cape Town, South Africa.

'This exquisitely-crafted study demonstrates how the visual language of early modern book-making rendered new worlds and peoples legible. Paying attention to the inside and outside of books, to their sentences as well as their material form, this meticulous volume shows how the conceptual grid of cardinal points came to construct ideas of "southern climes" and "the south". The study moves beyond postcolonial theories of self and other, offering wisdom for early modernists, postcolonial theorists, book historians, and literary and historical scholars. A cardinal study, in every sense of the word.' Isabel Hofmeyr, University of the Witwatersrand, Johannesburg, South Africa and New York University, USA

The Early Modern Global South in Print: Textual Form and the Production of Human Difference as Knowledge