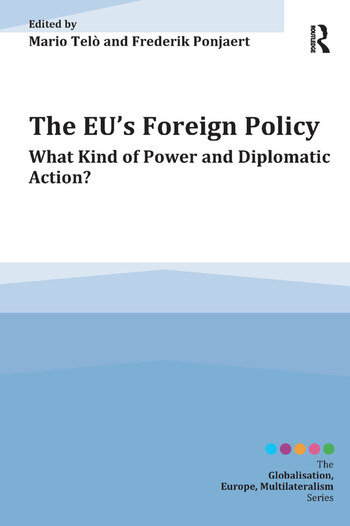 The EU's Foreign Policy: What Kind of Power and Diplomatic Action?

A very timely and topical volume concerned with the impact of the Lisbon Treaty on the European Union’s (EU) capacity to further develop a distinctive foreign policy in accordance with the various policy instruments necessary to fulfil its role as a global actor. This edited volume brings together a host of scholars in the fields of European Studies and International Relations whose contributions offer both innovative theoretical perspectives and new empirical insights. Overall, the book emphasizes the question of the EU’s evolving legitimacy and efficiency as a foreign policy and diplomatic actor on the regional and global stage. This shared concern is clearly reflected in the book’s three-pronged structure: Part 1 - the EU a controversial global political actor in an emergent multipolar world with contributions from A.Gamble, M.TelÃ² and J.Howorth; Part 2 - After the Lisbon Treaty: the Common Foreign and Security Policy and the European External Action Service, includes chapters from C.Lequesne, C.Carta and H.Mayer; Part 3 - R.Gillespie, F.Ponjaert, G.Grevi, Z.Chen, H.Nakamura and U.Salma Bava assess the CFSP and the EU’s external relations in action. Foreword by S.E.M P. Vimont. As a result, the book is a useful and relevant contribution to European Union studies and International Relations’ research and teaching. It offers any interested party informed and comprehensive insights into EU foreign policy at a time when it seeks to undertake an increased role in World affairs and this despite economic crisis.

Mario TelÃ² is a member of the Royal Academy of Sciences and professor of international relations at the Université Libre de Bruxelles, and of EU institutions at LUISS University, Rome. Frederik Ponjaert is researcher at the ULB and Katholieke Universiteit Leuven, and teaches comparative regionalism at Sciences Po, Paris.

’Commentators have often projected their own hopes and fears onto the EU and its Common Foreign and Security Policy (CFSP). Does the EU, in its foreign policy aspects, represent a post-modern� world of persuasion and public-spirited action or is it just a hapless would-be state that has to appeal to the United States, as in Bosnia and Libya, to act effectively? The contributors to The EU’s Foreign Policy - from Europe and the three most important Asian countries - reject this simplistic dichotomy, exploring how EU policy actually functions and describing its contributions to modifications in the structure of world politics. How the influence of the EU can be maintained despite financial crisis and long-term recession, and increasing German dominance, remains a major question, not resolved but illuminated by this thoughtful volume.’ Robert O. Keohane, Princeton University, USA ’The EU’s Foreign Policy is a welcome addition to the literature on EU foreign policy, as it critically assesses the changes that have been implemented since the Lisbon Treaty entered into force, and considers the EU’s influence in the increasingly multipolar world of the 21st century. The contributors are all highly respected experts, and include academics from well beyond the EU’s borders. Highly recommended.’ Karen E. Smith, London School of Economics, UK ’This volume is original and useful for three main reasons : it provides a conceptual framework for grasping the EU's idiosyncratic international power and diplomatic action; it offers a fresh analysis of the EEAS, its structure and relationship to the EU external action system; and it offers new research on EU diplomacy in action in the near and far abroad. In addition, contributions from scholars from China, Japan and India provide an invaluable perspective from the outside-in. The book will be especially useful for master and PhD students in EU studies.’ Kalypso Nikolaidis, St Anthony’s College, University

The EU's Foreign Policy: What Kind of Power and Diplomatic Action?