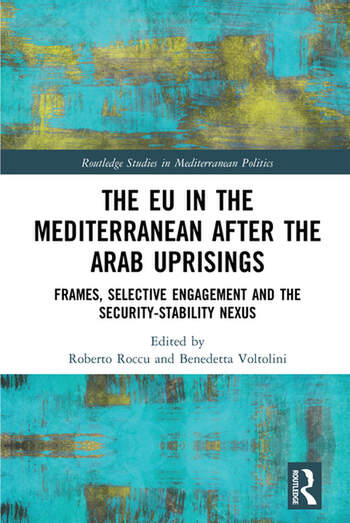 The EU in the Mediterranean after the Arab Uprisings: Frames, Selective Engagement and the Security-Stability Nexus

By examining a range of policy areas, this book aims to assess and qualify the claim that EU policies towards the Arab Mediterranean after the uprisings are predominantly marked by continuity with the past. This is attributed to the fact that the EU still acts with the aim of maximising its own security by preserving stability in the region. The book explores how security, stability and the link between them – the security-stability nexus – are better understood as the master frame shaping the EU’s approach towards the Southern Mediterranean and how this affects policy enactment. The book shows that the security-stability nexus has at least been reframed in the wake of the uprisings, but also that more change has occurred in the redefinition of the master frame than in its actual enactment. The framing and reframing of the security-stability nexus, before and after the Arab uprisings, depends on the policy area under consideration, the variety of actors involved, and the forms of their involvement. This is also crucially because of the different disposition towards the EU of prominent actors in Arab Mediterranean partner countries, which points towards the EU’s increasing difficulties to achieve its goals in its near abroad.

This book was originally published as a special issue of Mediterranean Politics.

Introduction - Framing and reframing the EU’s engagement with the Mediterranean: Examining the security-stability nexus before and after the Arab uprisings

1. From Neglect to Selective Engagement: The EU Approach to Rural Development in the Arab Mediterranean after the Arab Uprisings

3. EU democracy promotion and the dominance of the security–stability nexus

4. The EU and Islamist parties in Tunisia and Egypt after the Arab uprisings: A story of selective engagement

5. Counterterrorism and democracy: EU policy in the Middle East and North Africa after the uprisings

6. Thinking energy outside the frame? Reframing and misframing in Euro-Mediterranean energy relations

7. Changing the path? EU migration governance after the ‘Arab spring’

8. EU religious engagement in the Southern Mediterranean: Much ado about nothing?

9. Security and stability reframed, selective engagement maintained? The EU in the Mediterranean after the Arab uprisings

Roberto Roccu is Senior Lecturer in International Political Economy in the Department of European & International Studies at King’s College London, UK. His research focuses on the international political economy of the Middle East and North Africa, and on the EU’s reform promotion in the region.

Benedetta Voltolini is Lecturer in European Foreign Policy in the Department of European and International Studies at King’s College London, UK. Her research focuses on EU foreign policy towards the Middle East and North Africa, on lobbying and framing in EU external relations.

The EU in the Mediterranean after the Arab Uprisings: Frames, Selective Engagement and the Security-Stability Nexus