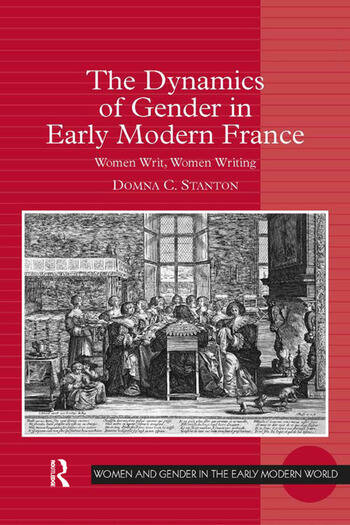 In its six case studies, The Dynamics of Gender in Early Modern France works out a model for (early modern) gender, which is articulated in the introduction. The book comprises essays on the construction of women: three in texts by male and three by female writers, including Racine, Fénelon, Poulain de la Barre, in the first part; La Guette, La Fayette and Sévigné, in the second. These studies thus also take up different genres: satire, tragedy and treatise; memoir, novella and letter-writing. Since gender is a relational construct, each chapter considers as well specific textual and contextual representations of men. In every instance, Stanton looks for signs of conformity to-and deviations from-normative gender scripts. The Dynamics of Gender adds a new dimension to early modern French literary and cultural studies: it incorporates a dynamic (shifting) theory of gender, and it engages both contemporary critical theory and literary historical readings of primary texts and established concepts in the field. This book emphasizes the central importance of historical context and close reading from a feminist perspective, which it also interrogates as a practice. The Afterword examines some of the meanings of reading-as-a-feminist.

Domna C. Stanton, Distinguished Professor of French at the Graduate Center, City University of New York, is the author of books and essays on early-modern French studies, women’s writing and feminist theory, and the practices of Human Rights. She is past President of the Modern Language Association, former editor of PMLA, and currently serves on a number of non-profit boards.

’... [an] ambitious, illuminating analysis of gender identity in early-modern French literature. ... groundbreaking ... [Stanton's] erudition is impressive, her methodology exemplary. ... this study is destined to become a classic ... Essential. Lower-division undergraduates through faculty.’ Choice 'Writing with great elegance and critical depth, Stanton brings together a deep understanding of the literary and cultural history of seventeenth-century France, as well as of gender theory. Readers will benefit for many years to come from Stanton’s knowledge of the highly controversial aspects of women’s history in all its nuances (seen from both the male and female perspectives) and from her readings of the texts she analyzes in which philology becomes a form of rigorous philosophy, illuminating the status of women in early modern society.' Lawrence D. Kritzman, Dartmouth College, USA