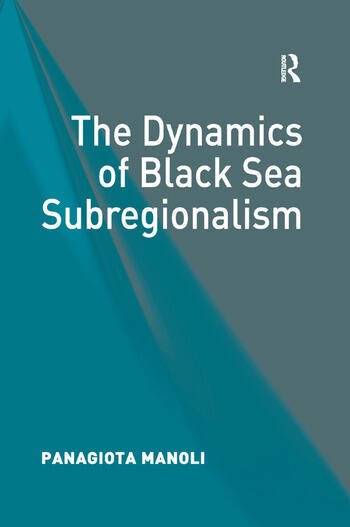 The Dynamics of Black Sea Subregionalism

Conflict and cooperation are two dynamics that have shaped the political economy and international relations around the Black Sea since the early nineties. Despite the negative structural environment and the persistence of a high security dilemma, cooperative efforts among Black Sea actors (primarily state elites but increasingly non-state actors) have been advancing, even though slowly. Representing a new development in the study of contemporary regionalism, Panagiota Manoli examines the process of institutionalized subregional cooperation and casts new light on the factors influencing the reconfiguration of subregional structures in the region. Focusing on the primary initiative in the region, Black Sea Economic Cooperation (BSEC), Manoli traces how subregionalism has evolved since the early nineties and what has been driving and conditioning this process. Questioning whether there is a definitive nature to subregionalism, Manoli then discusses Black Sea subregionalism within the European integration process, examining the impact of the European Union. Contributing to the conceptualization of the subregional phenomenon, this book should be read by scholars and policy-makers alike unclear on how local elements interface with extra-regional forces in the shaping of a subregion.

Panagiota Manoli is Lecturer of Political Economy of International Relations at the Department of Mediterranean Studies, University of the Aegean (Rhodes - Greece).

'This book is by far the most complete and comprehensive presentation to date of the origins, evolution, current state of affairs and actors involved in the process that is shaping the identity of the Black Sea regionalism'. from the Foreword by Ambassador Sergiu Celac 'Panagiota Manoli's dedication to, and insight on, issues pertaining to Black Sea regionalism have long been acknowledged by policy-makers and academics alike. As Europe struggles with renewed introspection, this book is a potent reminder that Europe's most daunting challenges in a fast-changing world are still very close to home.' Fabrizio Tassinari, Danish Institute for International Studies; and author of Why Europe Fears its Neighbors 'For too long, scholars of regional dynamics have lacked a study of the Black Sea sub region. We now have such a volume thanks to the excellent scholarship of Panagiota Manoli. Systematic in its empirical coverage, attentive to key theoretical debates and insightful in its conclusions, this impressive book shows why the Black Sea case is important to both wider discussions about regionalism and deeper understanding of the importance of European integration.' Ben Rosamond, University of Copenhagen, Denmark 'Panagiota Manoli has provided us with a detailed analysis of the changing geopolitics of the Black Sea, and offers key pointers about the future of regional cooperation in this strategically vital arena.' Ian O. Lesser, The German Marshall Fund of the United States 'The Dynamics of Black Sea Subregionalism is one of those books from which policy-makers, scholars and students would greatly profit. Although its purpose ’is to provide for historical and empirical rather than strong theoretical insights’ (11), the book not only presents to the reader the intricacies of the myriad cooperative arrangements pertaining to the Black Sea, but it also clarifies key notions such as region, subregion, regionalism and subregionalism, whose frequent but indiscriminate

The Dynamics of Black Sea Subregionalism