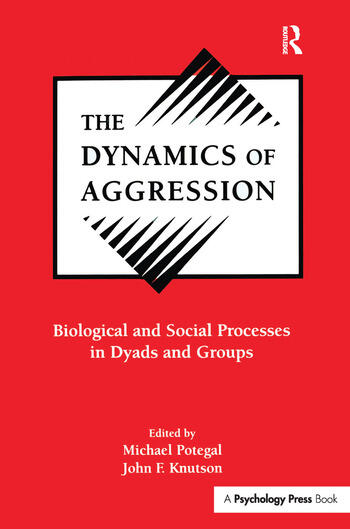 The Dynamics of Aggression: Biological and Social Processes in Dyads and Groups

Aggression usually involves a sequence of behaviors, reflecting escalations and de-escalations in the form or intensity of the actions taken, which play out over time. This book provides a context in which social and biological research on the aggressive behaviors of human and non-human subjects, interacting in dyads or groups, can be compared and integrated. Implicit in this juxtaposition is the major question of whether general principles governing the dynamics of aggression within and between episodes may be discerned. Aggressive behavior is described at different levels of analysis in humans and a number of other animal species. Three basic views of aggression dynamics become apparent:

* The economic interpretation: Aggression will be escalated when it pays one of the combatants to do so or, more generally, when the potential benefits outweigh the risks. Decisions to escalate or de-escalate are part of a calculated "strategy", in one or another sense. This interpretation is formalized within game theoretic models as applied to animal conflicts and to international conflicts, within the chapters of this text.

* The psychological process interpretation: Emphasis is placed on psychological/physiological processes within the individual. The chapters stress the importance of acute emotional states of anger and aggressive arousal and argue the role of peripheral sympathetic activation, while proposing a central neural mechanism. Children escalating their tantrums, adult humans and animals of other species intensifying their interpersonal conflicts, national leaders going to a war footing all appear to suffer a narrowing of attention and progressive failure of cognitive function under the intensifying stress of conflict. Perhaps these changes in attention, sensory and cognitive functions, and risk taking reflect a "commitment to aggression" which is necessary for organisms to engage in potentially dangerous and painful encounters.

* The emergent process interpretation: Escalation emerges in a spontaneous and dynamic way as the actions of one participant elicit reactions from the other(s).

The Dynamics of Aggression: Biological and Social Processes in Dyads and Groups