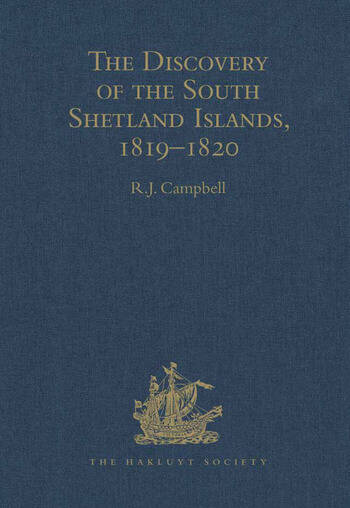 The Discovery of the South Shetland Islands / The Voyage of the Brig Williams, 1819-1820 and The Journal of Midshipman C.W. Poynter

In 1819, William Smith, with a general cargo from Montevideo to Valparaiso, sailed further south round Cape Horn than his predecessors, in the hope of finding favourable winds. He sighted land in 62S. His report to the Senior Naval Officer in Valparaiso was ridiculed, but on a subsequent voyage he confirmed his discovery, taking surroundings and sailing along the coast. As a result Captain Shirreff, the Senior Naval Officer, chartered his vessel, the brig Williams, and having put Edward Bransfield, the master of his ship, HMS Andromache, in charge, sent her to survey the new discovery. Charles Poynter was one of the midshipmen who sailed with Bransfield. His account of this expedition, which forms the principal part of this volume, recently came to light in New Zealand, and is the only first-hand account of the voyage, during which the Antarctic mainland was sighted for the first time, that appears to have survived. The introduction contains some remarks on the South Shetland Islands, followed by chapters giving a brief look at the history of the Spanish in South America and the British presence in the area, together with the speculation leading to the search for Antarctica and chapters on early nineteenth-century navigation and hydrographic surveying. There were a number of second-hand accounts of William Smith’s earlier voyages, and Bransfield’s expedition which appeared in reports, journals and books at the time. These are included with brief accounts of other voyages to the South Shetland Islands which took place while Bransfield was in the area, to complete the picture. Poynter’s journal explains the reasons behind most of the names given to land features, some of which were not included in the published accounts at the time. There are also three charts and a number of views which are reproduced together with modern photographs of the area. It also contains a large number of geographical positions which enable a track chart of the voyage to be produced

’This work...is a model of its type. For those specialising in the early history of Antarctica, it will be an invaluable addition to their library. For anyone with a general interest in the adventurous days of exploration under sail, here is an enthralling true story.’ International Journal of Maritime History (2002)

The Discovery of the South Shetland Islands / The Voyage of the Brig Williams, 1819-1820 and The Journal of Midshipman C.W. Poynter