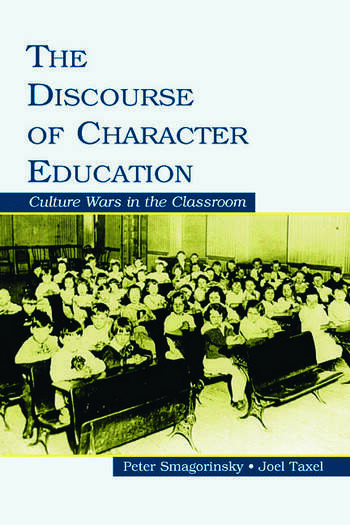 The Discourse of Character Education: Culture Wars in the Classroom

In this book Peter Smagorinsky and Joel Taxel analyze the ways in which the perennial issue of character education has been articulated in the United States, both historically and in the current character education movement that began in earnest in the 1990s.

The goal is to uncover the ideological nature of different conceptions of character education. The authors show how the current discourses are a continuation of discourse streams through which character education and the national purpose have been debated for hundreds of years, most recently in what are known as the Culture Wars--the intense, often passionate debates about morality, culture, and values carried out by politicians, religious groups, social policy foundations, and a wide range of political commentators and citizens, in which the various stakeholders have sought influence over a wide range of social and economic issues, including education.

The centerpiece is a discourse analysis of proposals funded by the United States Department of Education's Office of Educational Research and Improvement (OERI). Discourse profiles from sets of states that exhibit two distinct conceptions of character are examined and the documents from particular states are placed in dialogue with the OERI Request for Proposals. One profile reflects the dominant perspective promoted in the U.S., based on an authoritarian view in which young people are indoctrinated into the value system of presumably virtuous adults through didactic instruction. The other reflects the well-established yet currently marginal discourse emphasizing attention to the whole environment in which character is developed and enacted and in which reflection on morality, rather than didactic instruction in morality, is the primary instructional approach. By focusing on these two distinct regions and their conceptions of character, the authors situate the character education movement at the turn of the twenty-first century in the context of historical notions about the nature of character and regional conceptions regarding the nature of societal organization.

"Smagorinsky and Taxel's Discourse of Character Education raises interesting questions and opens provocative discussion about the current character education movement and of the actors within it."

"Smagorinsky and Taxel have done a real service in conducting and reporting this study. It will surely encourage readers to think about what we are doing to our children and, perhaps, to seek a better, morally defensible way to educate."
—Nel Noddings
From the Foreword

The Discourse of Character Education: Culture Wars in the Classroom