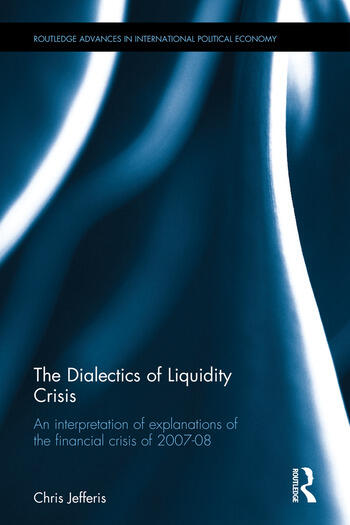 The Dialectics of Liquidity Crisis: An interpretation of explanations of the financial crisis of 2007-08

The book argues that explanation of the financial crisis of 2007–08 should involve interpretation of the concept of 'risk', which guides the construction and pricing of contemporary financial products such as derivatives and asset backed securities, as a form of 'liquidity', the concept that Minsky sought to explain the financial crises of the 1970s and 1980s with. The book highlights the continuing relevance of Minsky’s theory of liquidity crisis as "immanent", in a historical sense, to the products and trading practices of modern finance, because these products were developed to obviate the crisis dynamics that Minsky described. Minsky's FIH can therefore inform historical understanding of the crisis of 2007–08 but is not directly explanatory itself. The book explores explanation of the financial crisis of 2007–08 interpreting 'liquidity', in practical historical terms, as involving a process of development out of prior crisis dynamics.

Seeking to contribute to debates over the causes of the financial crisis of 2007–08 by blending a discussion of historicizing philosophy, economic theory and contemporary financial banking and trading practices this work will be of great interest to scholars of international political economy, heterodox economics and critical theory.

2. Minsky in context: a critique of "liquidity crisis" as an explanatory concept

5. Arbitrage as a historical structure shaping the US financial system

7. Recent financial instability in the US mortgage market: the three phases of risk

8. Economics, regulation and capital: an assessment of some proposed reforms

Chris Jefferis is post-doctoral research fellow in the Department of Political Science at Freie Universität’s John F. Kennedy Institute for North American Studies. He is also a joint recipient of an Institute for New Economic Thinking (INET) research grant analysing 'Financial Innovation and Central Banking in China: A Money View'.

The Dialectics of Liquidity Crisis: An interpretation of explanations of the financial crisis of 2007-08