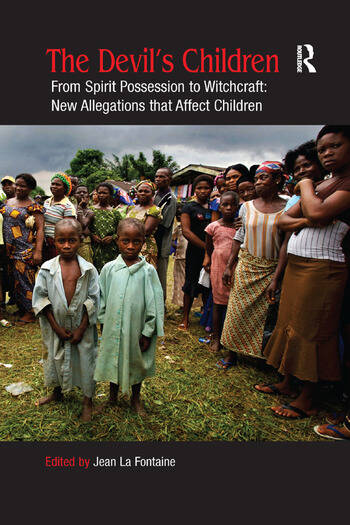 The Devil's Children: From Spirit Possession to Witchcraft: New Allegations that Affect Children

A number of cases of serious child abuse have resulted from beliefs that children may be possessed by evil spirits and may then be given the power to bewitch others. Misfortune, failure, illness and even death may be blamed on them. The 'cure', nowadays called deliverance rather than exorcism, is to expel the spirits, sometimes by violent means. This book draws together contributions on aspects of possession and witchcraft from leading academics and expert practitioners in the field. It has been put together following conferences held by Inform, a charity that provides accurate information on new religions as a public service. There is no comparable information publicly available; this book is the first of its kind. Eileen Barker, founder of Inform, introduces the subject and Inform's Deputy Director goes on to detail the requests the charity has answered in recent years on the subject of children, possession and witchcraft. This book offers an invaluable resource for readers, whether academic or practitioner - particularly those in the fields of the safeguarding of children, and their education, health and general welfare.

Professor Jean La Fontaine, Ph.D. Anthropology Cambridge is a Research Fellow of Inform, and Professor Emeritus at the London School of Economics. She has carried out anthropological fieldwork in eastern Uganda, Kinshasa (Democratic Republic of the Congo) and in England. She has taught anthropology at Birkbeck College London and the London School of Economics. Her most recent book, Speak of the Devil, concerned allegations of devil worship in England. She is currently studying accusations of witchcraft against children in London.

’This very important book brings enlightenment to the mindset of many cultures. All criminologists, criminal lawyers and social workers that practice in the jurisdiction of England, Wales, Northern Ireland and Scotland must read this book.’ The Criminal Lawyer ’This collection of academic essays by sociologists, psychiatrists, anthropologists, clergy, a police officer and a nurse has been published under the auspices of Inform. ... Highly recommended.’ The Cauldron '... a dynamic and well-chosen collection of chapters. ... The strength and originality of The Devil's Children lie not just in providing a multi-vocal exploration of the contexts and causes of such phenomena, and a useful roadmap for clinicians, social workers, and other experts that may be called upon to deal with such cases, but also in calling for a more careful, anthropologically sensitive discernment of information.' Journal of Contemporary Religion 'The Devil's Children is an important contribution to the study of a phenomenon that is not well understood. It is eminently readable, as many of the contributors write in a very informal, rather than an academic style. The book should be of interest not merely to scholars of religion, but to clergy, professional workers in the field of child-care, and church leaders.' Modern Believing

The Devil's Children: From Spirit Possession to Witchcraft: New Allegations that Affect Children