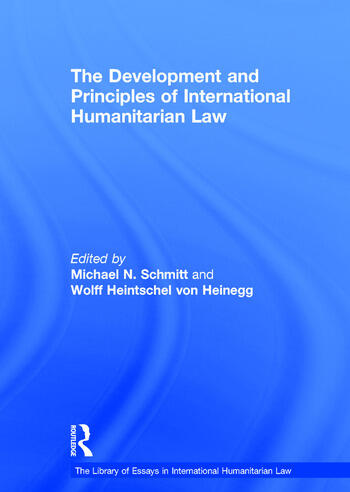 The Development and Principles of International Humanitarian Law

The essays selected for the first part of this volume offer an insight into the development, as distinguished from the history, of international humanitarian law. The focus of the majority of the works reprinted here is on an analysis of the adequacy of the law as it stood at the time of the respective publication and in the light of existing contemporary armed conflicts and military operations. Thus, the reader is afforded an in-depth look at the early roots of international humanitarian law, the continuing relevance of that body of law despite advances in weapons technology and the efforts to progressively develop it. International humanitarian law's development cannot be considered in isolation from its principles. The essays selected for the second part of the volume deal with the two fundamental principles underlying all of international humanitarian law: humanity and military necessity. The articles on the principles of humanity include reflections on the famous Martens Clause, and the analyses of military necessity take no account of 'Kriegsraison'. Moreover, they offer proof of the customary character of the principle of distinction in land, air and naval warfare.

Contents: Introduction, Wolff Heintschel von Heinegg; Part I Development: Shakespeare's Henry the Fifth and the law of war, Theodor Meron; The legitimation of violence: a critical history of the laws of war, Chris af Jochnick and Roger Normand; Some questions of international law in the European war, James W. Garner; The new Geneva Conventions for the protection of war victims, Jean S. Pictet; The chaotic status of the laws of war and the urgent necessity for their revision, Josef L. Kunz; The laws of war, Josef L. Kunz; Progressive development of the laws of war: a reply to criticisms of the 1977 Geneva Protocol I, George H. Aldrich; The United States position on the relation of customary international law to the 1977 Protocols additional to the 1949 Geneva Conventions, Michael J. Matheson; International humanitarian law: its remarkable development and its persistent violation, Dietrich Schindler; International humanitarian law in the 21st century, Yves Sandoz; Study on customary international humanitarian law: a contribution to the understanding and respect for the rule of law in armed conflict, Jean-Marie Henckaerts. Part II Principles: The humanization of humanitarian law, Theodor Meron; The Martens Clause: half a loaf or simple pie in the sky?, Antonio Cassese; The Martens Clause, principles of humanity and dictates of public conscience, Theodor Meron; The undertaking to respect and ensure respect in all circumstances: from tiny seed to ripening fruit, Frits Kalshoven; Lincoln, Lieber and the laws of war: the origins and limits of the principle of military necessity, Burrus M. Carnahan; The law of war and military necessity, William Gerald Downey Jr; Military necessity and humanitarian imperatives, G.I.A.D. Draper; The principle of the military objective in the law of armed conflict, Horace B. Robertson Jr; Name index.

The Development and Principles of International Humanitarian Law