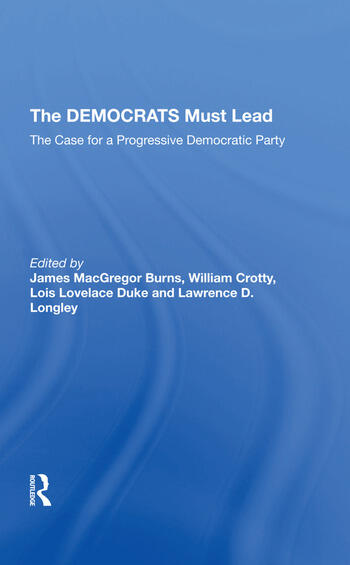 The Democrats Must Lead: The Case For A Progressive Democratic Party

All over the world, political parties are being born and political pluralism is being fostered. Ironically, here in the United States, the parties are blurring together ideologically, and the political process is suffering. One of the messages of this book is that a vital two-party system is essential to America’s political health. The last thing this country needs, the authors argue, is two Republican parties. At this critical moment in history, the Democratic party has the opportunity to offer the nation a real political choice, a sense of direction, and a program to address the needs of Americans in a changing world. It is time, they say, for a change—a change that only the Democrats can provide. As recounted here, a generation of Republican administrations have had their chance. The results have not been happy: deepening social divisions, heightened inequalities in income distribution, a decaying educational system, environmental exploitation, an insensitivity to the concerns of the less powerful, the largest public debt in history, and a foreign policy based on force. Recurring constitutional crises have also erupted, as epitomized by the Iran-Contra affair. The record is a sorry one. Alternatives exist, and the best ones rest with the Democratic party. The Democrats must lead. It is their responsibility to offer a new vision of the future and the means for achieving it—to provide a program that is compassionate, just, and inclusive of all. The politics of greed, exploitation, self-promotion, and militarism must be put behind us. Such are the themes of this extraordinary book. Leading academicians, each an expert in his or her area, emphasize the need for new leadership, propose contributions that a progressive Democratic party could make, and suggest what this party should stand for as well as how it can win in 1992. They urge the Democrats to be both brave and principled-brave in defying the conventional wisdom that Democrats must be moderate to win, and principled in sticking to progressive ideals. The book provides analysis of such areas as the political impact of an issue-oriented, liberal party; the campaign and media choices required to get a progressive message across; the role and concerns of women, blacks, Hispanics, and other underrepresented groups; electoral and legislative strategies for success; and the substance of what a progressive policy agenda should contain. Challenging and thought-provoking, these essays will help reshape political thinking during this critical period in the nation’s history. Their objective is creation of a society that represents and responds to human needs, and the authors indicate the way to achieve these goals through an invigorated, forward-looking Democratic party.

Preface -- A Party That Can Lead/A Party That Should Lead -- The Democrats Must Lead—But How? -- Why We Still Need Real Political Parties -- The National Democratic Party Can Lead -- Who Needs Two Republican Parties? -- A Congressional Party Must Stand for Something -- Getting the Message Across: How? To Whom? -- Dump Dixie—West Is Best: The Geography of a Progressive Democracy -- What to Say and How to Say It? -- Television, the 1992 Democratic Presidential Hopeful, and Electoral Success -- Minority Politics and “Political Realities” in American Politics -- Progressive Democrats and Support for Women’s Issues -- Latinos and the Democratic Party -- A Politics of Substance -- A Democratic Economic Policy -- A New World Order That Means Something -- Winning a Government: Reinvigorating the Political System

"James MacGregor Burns is Woodrow Wilson Professor of Government Emeritus at Williams College and is currently on the faculty at the Jepson School of Leadership Studies at the University of Richmond. A Pulitzer Prize-winning historian, he has published widely in the area of American government and politics and is the founder of Political Scientists for a Progressive Democratic Party. William Crotty is professor of political science at Northwestern University. He is the author of a number of books on political parties and elections, including The Party Game, Party Reform, Political Reform and the American Experiment, and Decision for the Democrats, and editor and co-editor of several other works including Political Parties in Local Areas, Political Participation and American Democracy, and the four-volume Political Science: Looking to the Future. He has served as president of the Midwest Political Science Association, the Policy Studies Organization, and the Political Organizations and Parties Section of the American Political Science Association from which he received the Samuel J. Eldersveld Lifetime Achievement Award in 1991. He is presently co-chair of Political Scientists for a Progressive Democratic Party. Lois Lovelace Duke is associate professor of political science at Clemson University and co-chair of Political Scientists for a Progressive Democratic Party. She is author of many pieces on media and politics and on women and politics, including the forthcoming Women and Politics: Have the Outsiders Become Insiders? Lawrence D. Longley, professor of government at Lawrence University in Appleton, Wisconsin, is the author of more than seventy articles, papers, and books on American politics and political institutions, including Bicameral Politics (on Congress), The People’s President (on the American presidency), and his forthcoming Changing the System (on U.S. and British electoral reform). A long-time grassroots Democratic party activist in Wisconsin, he served five terms as a county political party chairman and has been elected to the State Party Administrative (Central) Committee since 1971. Currently a member of the Democratic National Committee, Professor Longley will be an automatic, unpledged, and determinedly uncommitted delegate to the 1992 Democratic National Convention in New York City."

The Democrats Must Lead: The Case For A Progressive Democratic Party