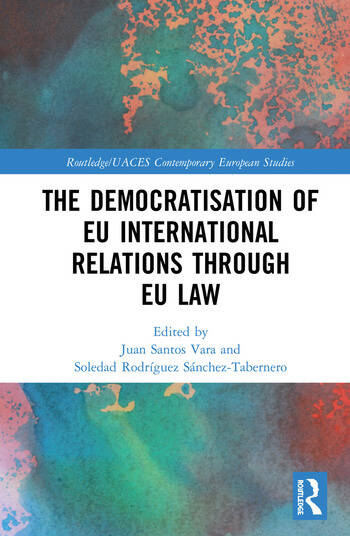 The Democratisation of EU International Relations Through EU Law

Since the entry into force of the Treaty of Lisbon, key improvements have occurred in the democratisation of EU international relations through the increased powers of the European Parliament. Nevertheless, a comprehensive legal analysis of the new developments in democratic control of EU external action has not yet been performed.

This book aims to improve the understanding of the set of mechanisms through which democratic control is exerted over EU external action, in times of profound transformations of the legal and political architecture of the European integration process. It analyses the role of the Court of Justice in the democratisation of international relations through EU law, and further provides a legal overview of the role of the European Parliament in the conduct of the EU's international relations. In those areas where the powers of the Parliament have greatly increased the book aims to raise questions as to whether this enhanced position has contributed to a more consistent external action. At the same time, the book aims to contribute to the debate on judicial activism in connection with the democratisation of EU external action. It offers the reader a detailed and topical analysis of the recent developments in democratic control of external action which are of relevance in the daily practice of EU external relations lawyers, including the topic of mixed agreements

This text will be of key interest to scholars and students working on EU external relations law, EU institutional law, European Union studies/politics, international relations, and more broadly to policy-makers and practitioners, particularly to those with an interest on the European Parliament and the Court of Justice of the European Union.

PART I: The Role of the Court of Justice in the Interplay between Democracy and Institutional Balance

2. The CJEU and the External Powers of the Parliament: Self-Restraint or Activism? [Fabien Terpan]

PART II: The Role of the European Parliament in the Conclusion of International Agreements in the Post-Lisbon Period

3. The European Parliament in the Conclusion of International Agreements Post-Lisbon: Entrenched between Values and Prerogatives [Juan Santos Vara]

4. A Tale of Two Principles: Exploring the Democracy-Consistency Nexus in Light of the Pirate-Transfer Saga [Soledad R. Sánchez- Tabernero]

6. The Role of the European Parliament in the Adoption of Non-Legally Binding Agreements with Third Countries [Paula García Andrade]

PART III: Democratic Oversight by the European Parliament: beyond the Conclusion of International Agreements

PART IV: The Role of National Democracies in a Multilevel System: A Needed Extra Layer of Legitimacy?

10. Rebels with a Cause? National and Subnational Parliaments in EU External Action after Lisbon [Jan Wouters and Kolja Raube]

Juan Santos Vara is Jean Monnet Chair in EU External Action, Professor of Public International Law and European Law, Director of the Master in European Studies and Coordinator of the European Joint Master’s in Strategic Border Management at the University of Salamanca, Spain.

Soledad R. Sánchez-Tabernero is a Doctoral Research Fellow at the Department of Public International Law and International Relations of the University of Salamanca, Spain.

The Democratisation of EU International Relations Through EU Law