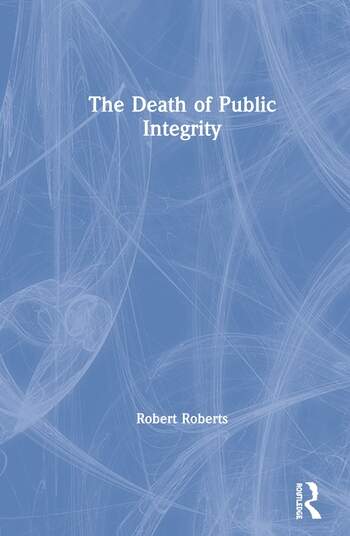 The Death of Public Integrity

From the late nineteenth century through the 1970s, several government reform movements succeeded in controlling traditional types of public corruption. But has this historic success led to a false sense of security among public management scholars and professionals? As this book argues, powerful special interests increasingly find effective ways to gain preferential treatment without violating traditional types of public corruption prohibitions. Although the post-Watergate good government reform movement sought to close this gap, the 1980s saw a backlash against public integrity regulation, as the electorate in the United States began to split into two sharply different camps driven by very different moral value imperatives.

Taking a historical view from the ratification of the U.S. Constitution through to the Trump administration, The Death of Public Integrity details efforts by reformers to protect public confidence in the integrity of government at the local, state, and federal levels. Arguing that progressives and conservatives increasingly live in different moral worlds, author Robert Roberts demonstrates the ways in which it has become next to impossible to hold public officials accountable without agreement on what constitutes immoral conduct. This book is required reading for students of public administration, public policy, and political science, as well as those interested in public service ethics.

I. From Hope to Despair

III. Ethical Invincibility and the Golden Age of Public Administration

IV. Public Ethics Polarization and the Breakdown of Civility

VII. The Appearance of Propriety

VIII. The Morality Firestorm and the Campaign of 2016

X. The New Public Integrity: From Despair to Hope

The Death of Public Integrity