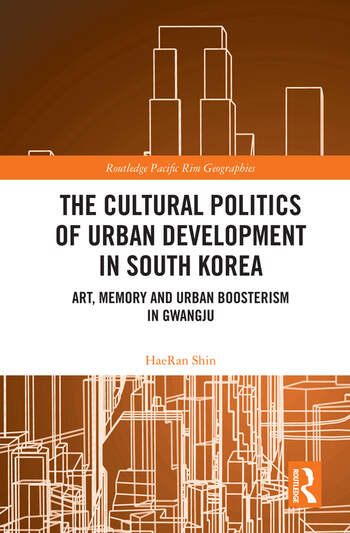 The Cultural Politics of Urban Development in South Korea: Art, Memory and Urban Boosterism in Gwangju

This book analyses the cultural politics of urban development in Gwangju, South Korea, and illustrates the implementation of state-led arts-based urban boosterism efforts in the context of political trauma and the desire for economic growth.

The book explores urban development that is complicated by the recent history of democratic uprising in Gwangju, and it examines the dichotomy between cities as growth machines and progressive cities. Actor-oriented qualitative research methods are used to show how culture and economies can evolve from territorial conflicts. The author argues that the quest for both growth and social justice can coexist in intertwined ways and create urban development. Moreover, recent events in Gwangju, such as the May 18 Democratic Uprising and massacre, are shown to act as a backdrop for state-led urban boosterism and desire for economic growth at the same time as depicting a resistance to state-corporate marketing plans, which culminates in the eventual emergence of relatively coherent places-of-memory. These convergences and divergences are comparable to the urban boosterism characteristic of Western cities.

The book contributes to the dialogue surrounding geography, urban studies, and postcolonial urban development, and will be of interest to academics working in these fields as well as human geography, planning, urban politics and East Asian studies.

5. "We are not united any longer" – Emerging Opportunities and Challenges within Civil Society

6. The Politics of Place-of-memory Making

HaeRan Shin is Professor in the Department of Geography at Seoul National University, South Korea.

The Cultural Politics of Urban Development in South Korea: Art, Memory and Urban Boosterism in Gwangju