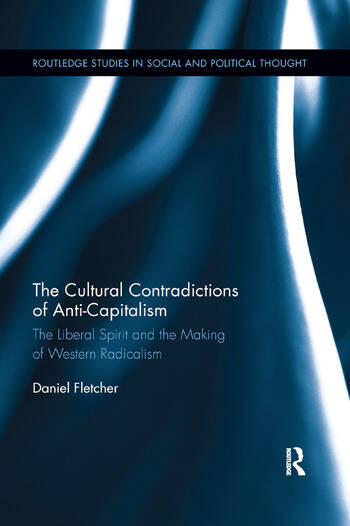 The Cultural Contradictions of Anti-Capitalism: The Liberal Spirit and the Making of Western Radicalism

Within The Cultural Contradictions of Anti-Capitalism, Fletcher presents an answer that manages to tend towards both simultaneously. In entering into contemporary debates on radicalism, this innovative volume proposes a revised conception of Hardt and Negri’s philosophy of emancipatory desire. Indeed, Fletcher reassesses Hardt and Negri’s history of Western radicalism and challenges their notion of an alter-modernity break from bourgeois modernity. In addition to this, this title proposes the idea of Western anti-capitalism as a spirit within a spirit, exploring how anti-capitalist movements in the West pose a genuine challenge to the capitalist order while remaining dependent on liberalist assumptions about the emancipatory individual.

Inspired by post-structuralism and rejecting both revolutionary transcendence and notions of an underlying desiring purity, The Cultural Contradictions of Anti-Capitalism offers new insight into how liberal capitalist society persistently produces its own forms of resistance against itself. This book will appeal to graduate and postgraduate students interested in fields such as: Sociology, Politics, International Relations, Cultural Studies, History, and Philosophy.

Perspectives on Contemporary Radicalism: Transcendence and the Immanentist Break

A Short History of Bourgeois Self-Emancipation: From Spinoza to Locke and Onwards.

May 1968: Towards the Limits of Self-Emancipatory Radicalism.

Deleuze and Guattari: Self-Emancipatory Philosophy in the ’68 Era

Hardt and Negri on Postmodernisation: Self-Emancipatory Radicalism in the Politics of the Multitude

Daniel Fletcher is an independent researcher and writer living in the West Midlands, England.

The Cultural Contradictions of Anti-Capitalism: The Liberal Spirit and the Making of Western Radicalism