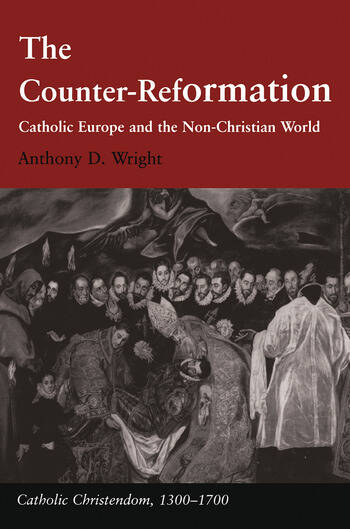 The Counter-Reformation: Catholic Europe and the Non-Christian World

Modern scholarship has effectively demonstrated that, far from being a knee-jerk reaction to the challenges of Protestantism, the Catholic Reformation of the sixteenth and seventeenth centuries was fuelled primarily by a desire within the Church to reform its medieval legacy and to re-enthuse its institutions with a sense of religious zeal. In many ways, both the Protestant and Catholic Reformations were inspired by the same humanist ideals and though ultimately expressed in different ways, the origins of both movements can be traced back to the patristic revival of the fifteenth and sixteenth centuries. Nevertheless, it is undeniable that many contemporaries, and subsequent historians, came to view the Catholic Reformation as an attempt to challenge the Protestants and to cut the ground from beneath their feet. In this new revised edition of Dr Wright's groundbreaking study of the Counter-Reformation, the wide panoply of the Catholic Reformation is spread out and analysed within the political, religious, philosophical, scientific and cultural context of late medieval and early modern Europe. In so doing, this book provides a fascinating guide to the many doctrinal and interrelated social issues involved in the wholesale restructuring of religion that took place both within Western Europe and overseas.

Dr Anthony D. Wright is Reader in Ecclesiastical History at the University of Leeds, UK.

'The intellectual texture of this work is extremely rich. The author has read an immense amount, and the revised bibliography which is appended is massive and comprehensive, enabling the reader to follow up any theme which has caught his or her attention... for anyone wishing to think deeply about the complex interactions of jurisdiction, piety and theology in most of Europe during the protracted 'rain shadow' of the Council of Trent, this work is necessary reading.' Archiv fÃ¼r Reformationsgeschichte ’First published in 1982, this work has long been recognized as one of the most daring, learned and potentially brilliant studies of this most controversial topic. Its main strength, and one which seems as robust now as when it was first published, is to be found in the searching challenges it poses to some of the major questions that still dominate the study of the Counter-Reformation.’ European History Quarterly

The Counter-Reformation: Catholic Europe and the Non-Christian World