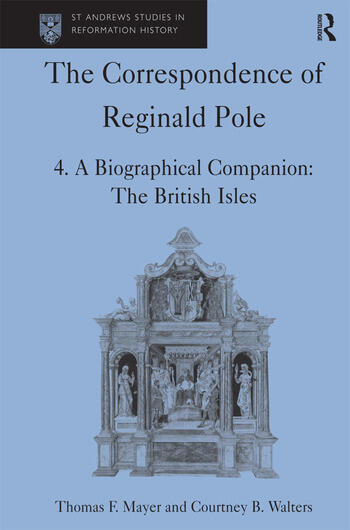 The Correspondence of Reginald Pole: Volume 4 A Biographical Companion: The British Isles

Reginald Pole (1500-1558), cardinal and archbishop of Canterbury, was at the centre of reform controversies in the mid 16th century - antagonist of Henry VIII, a leader of the reform group in the Roman Church, and nearly elected pope (Julius III was elected in his stead). His voluminous correspondence - more than 2500 items, including letters to him - forms a major source for historians not only of England, but of Catholic Europe and the early Reformation as a whole. In addition to the insight they provide on political history, both secular and ecclesiastical, and on the spiritual motives of reform, they also constitute a great resource for our understanding of humanist learning and cultural patronage in the Renaissance. Hitherto there has been no comprehensive, let alone modern or accurate listing and analysis of this correspondence, in large part due to the complexity of the manuscript traditions and the difficulties of legibility. The present work makes this vast body of material accessible to the researcher, summarising each letter (and printing key texts usually in critical editions), together with necessary identification and comment. The first three volumes in this set will contain the correspondence; the fourth and fifth will provide a biographical companion to all persons mentioned, and will together constitute a major research tool in their own right. This first volume covers the crucial turning point in Pole’s career: his protracted break with Henry and the substitution of papal service for royal. One major dimension of this rupture was a profound religious conversion which took Pole to the brink of one of the defining moments of the Italian Reformation, the writing of the ’Beneficio di Christo’.

Thomas F. Mayer is Professor of History and Chairman of the Center for the Study of the Christian Millennium, Augustana College Rock Island, USA.

'Mayer's edition of Pole's correspondence. . .will be a major gift to Reformation research'. Journal of Ecclesiastical History '... a valuable resource for scholars working across the political, literary and theological spectrum.' Recusant History '... a most valuable source book for scholars of the English Reformation and Catholic Europe... it is no exaggeration to insist upon the outstanding contribution which Mayer has here made in the first of three volumes to be completed by a fourth, biographical volume, which should make of the whole a landmark in European historiography.' Journal of Ecclesiastical History '... for anyone with a serious interest in this frustrating but important man, Mayer's work is an essential vademecum. It is also a comprehensive guide to the relevant archival resources, and to the state of Pole scholarship from the seventeenth century to the present day. Nobody knows his way around this particular part of the scholarly world in the way that Mayer does, and we must be grateful for this additional work of guidance.' Archiv fÃ¼r Reformationsgeschichte 'This volume has set a high standard for the rest of the project, being admirable both in its scope and impeccable research... this project can be considered definitive for Pole's surviving correspondence. Detailed footnotes, an index to persons cited in the correspondence, assiduous dating and rigorous explanation combine to create an unquestionably scholarly volume, yet one which is highly accessible.' Sixteenth Century Journals 'Thomas Mayer has performed a considerable service in editing for publication the vast bulk of the extant correspondence of Cardinal Pole...' Renaissance Quarterly '... will be a useful resource for many, and forms part of an important wider project.' History ’It can be said without qualification that Mayer's Calendar, especially volume 3, covering the years 1554-1558, should become the first port of call for all future students of Pole... Mayer has done u

The Correspondence of Reginald Pole: Volume 4 A Biographical Companion: The British Isles