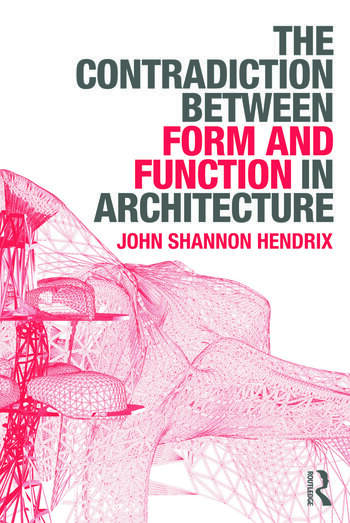 The Contradiction Between Form and Function in Architecture

Continuing the themes that have been addressed in The Humanities in Architectural Design and The Cultural Role of Architecture, this book illustrates the important role that a contradiction between form and function plays in compositional strategies in architecture. The contradiction between form and function is seen as a device for poetic expression, for the expression of ideas, in architecture.

Here the role of the terms "form" and "function" are analyzed throughout the history of architecture and architectural theory, from Vitruvius to the present, with particular emphasis on twentieth-century functionalism. Historical examples are given from Ancient, Classical, Islamic, Christian, Byzantine, Gothic, Renaissance, Mannerist, and Neoclassical architecture, and from movements in the twentieth century to the present.

In addition philosophical issues such as lineamenti, Vorstellung, différance, dream construction, deep structure and surface structure, topology theory, self-generation, and immanence are explored in relation to the compositions and writings of architects throughout history.

This book contributes to the project of re-establishing architecture as a humanistic discipline, to re-establish an emphasis on the expression of ideas, and on the ethical role of architecture to engage the intellect of the observer and to represent human identity.

John Shannon Hendrix is Professor of Architectural History at the University of Lincoln, UK, and Adjunct Professor at Roger Williams University and at Rhode Island School of Design, USA.

The Contradiction Between Form and Function in Architecture