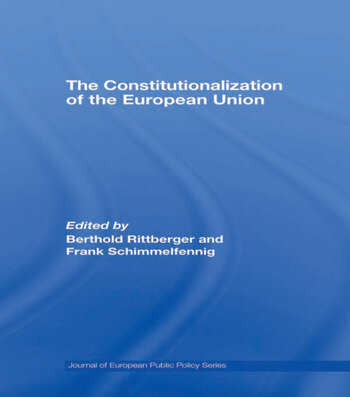 The Constitutionalization of the European Union

This volume presents a theory of constitutionalization as well as comparative analyses and case studies to underscore the claim that the European integration process itself engenders a democratic self-healing mechanism.

There exists a consensus among academics, politicians, and the public that the European Union suffers from a ‘democratic deficit’. But how can it be resolved? This book deals with two core areas central for the development of the liberal-democratic constitutional state: the extension of the powers of representative assemblies and the institutionalization of human rights. The European Union has made remarkable progress in these two areas over the past half century. Whenever a planned step of European integration through transfers of sovereignty threatens to undermine domestic standards of parliamentary control and human rights standards, political elites in the member states regularly mobilize to counteract these developments. The proponents of the Union’s ‘constitutionalization’ regularly invoke democratic and human rights norms shared by all members of the European Union to successfully exercise moral pressure on the sceptics of further constitutionalization.

This book was previously published as a special issue of the Journal of European Public Policy.

Frank Schimmelfennig is Professor of European Politics at ETH Zurich.

The Constitutionalization of the European Union