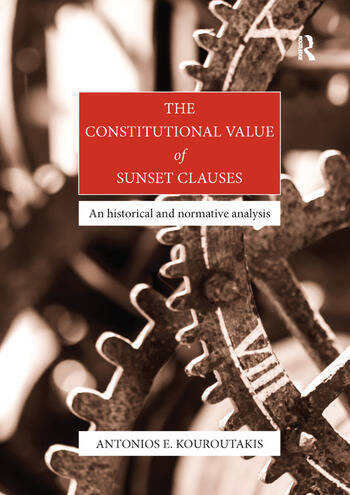 The Constitutional Value of Sunset Clauses: An historical and normative analysis

In recent years, sunset clauses have mostly been associated with emergency legislation introduced in the wake of terrorist attacks. However, as this book demonstrates, they have a long history and a substantial constitutional impact on the separation of powers and the rule of law. In addition, the constitutional value of such clauses is examined from certain neglected normative aspects pertaining to concepts such as deliberative and consensus democracy, parliamentary sovereignty and constitutional dialogue.

The work is an amalgam of three perspectives: the historical, the positive and the normative. All three are intertwined and each subsequent part builds upon the findings of the previous one. The historical perspective investigates the historical development of sunset clauses since the first Parliaments in England. The positive perspective examines the legal effect and the contemporary utility of sunset clauses. Finally, the normative perspective analyses their interaction with several models of separation of powers, and their influence on the dialogue between various institutions as it values their impact on the rule of law, formal and substantive.

The detailed examination of this topical subject will be a valuable resource for academics, researchers and policy makers.

A. The Meaning of Sunset Clauses and their Legal Effect

B. Typology of Sunset Clauses

Chapter 2: Sunset Clauses As An Expression of Legislative Power in the Medieval England

A. Early Use of Sunsets

C. The Use of Sunset Clauses in the Interna Corporis

Chapter 3: Sunset Clauses in a Period of Transition

A. The Period of Tension

B. Sunset Clauses in the Era of Balance of Powers

Chapter 4: Sunset Clauses in the Era of Parliamentary Sovereignty

A. Sunset Clause and Parliamentary Sovereignty

B. Emerging Elements of the Rule of Law and Sunset Clauses

A. Defining Separation of Powers

B. How the Use of Sunset Clauses Affects the Separation of Powers

C. How the Separation of Powers affects the Use of Sunset Clauses

B. Dialogue between the Parliament and Courts

A. Formal Conceptions of the Rule of Law

B. The Rule of Law and the Temporary Nature of Laws

A. Sunset Clauses and the Substance of the Law

B. Sunset Clauses in Times of Emergencies

The author Antonios Emmanouil Kouroutakis is Assistant Professor at IE University. He has published on aspects of terrorism, emergencies and constitutional law in both English and Greek.

Time is a critical and underappreciated lever of legal regulation, and one greatly elucidated by this important account of sunset clauses. At once encyclopedic and theoretically accessible, the book shows that sunsetting is both frequent and in many cases effective. A valuable addition to the literature. Tom Ginsburg, Deputy Dean, Leo Spitz Professor of International Law, Ludwig and Hilde Wolf Research Scholar, and Professor of Political Science, University of Chicago.

Kouroutakis’ book offers the most comprehensive historical analysis of sunset clauses and temporary laws in the common law literature. By delving into the historical roots of sunset clauses and tracing them back to the Roman Empire and the Medieval times in England, this book explains how this instrument has been used to maintain a balance between legislative and executive powers. Kouroutakis provides a thorough description of how sunset clauses have been employed throughout the times to gather parliamentary consensus and accelerate the lawmaking process during emergencies, two functions which these provisions still perform in modern times. This book is not only a phenomenal historical study of temporary legislation but it is also a fundamental book to understand the principle of separation of powers and the rule of law. Sofia Ranchordas, Assistant Professor of Constitutional and Administrative Law, Leiden Law School, The Netherlands & Affiliated Fellow, Information Society Project, Yale Law School.

The Constitutional Value of Sunset Clauses: An historical and normative analysis has been cited in the following UK parliamentary reports:

The book has also been referenced in Hansard.

The Constitutional Value of Sunset Clauses: An historical and normative analysis