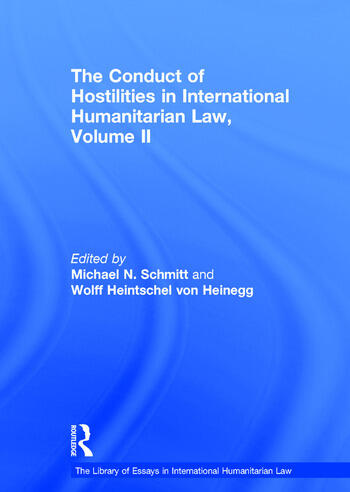 The Conduct of Hostilities in International Humanitarian Law, Volume II

The essays selected for this second volume on the conduct of hostilities examine discrete topics of international humanitarian law that are particularly relevant to 21st century warfare. It commences with an examination of the adequacy of traditional weapons law in the face of modern weaponry that could not have been conceived of at the time the norms were originally fashioned. Humanitarian law's protection of certain persons and objects is also addressed, especially with regard to loss of protection for civilians who participate in hostilities and to the special protections enjoyed by vulnerable groups and individuals. The essays not only set forth competing contemporary perspectives, but also illustrate how earlier generations of humanitarian lawyers struggled with many of the same issues. The essays equally illustrate humanitarian law's adaptability to changing sensitivities, as in the case of protection of the environment during armed conflict. The final essay analyzes perfidy, a violation of the law that weaker parties in asymmetrical conflicts are increasingly adopting as an operational tactic.

The Conduct of Hostilities in International Humanitarian Law, Volume II