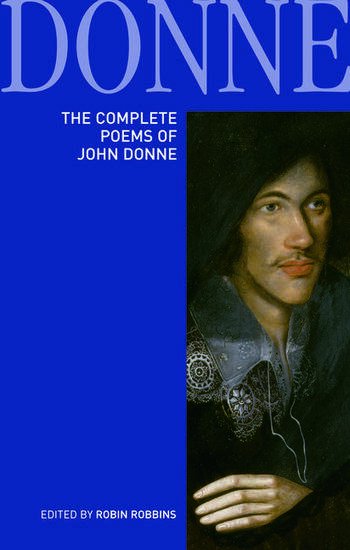 The Complete Poems of John Donne

The Poems of John Donne is one volume paperback edition of the poems of John Donne (1572-1631) based on a comprehensive re-evaluation of his work from composition to circulation and reception. Donne’s output is tremendously varied in style and form and demonstrates his ability to exercise his rhetorical capabilities according to context and occasion. This edition aims to present the text of all his known poems, from the epigrams, songs and satires written for fellow young men about town, to the more mature verse-epistles and memorial elegies written for his patrons.

The Longman Annotated English Poets series traditionally aims to present poems in chronological order; in this edition, however, the principle has been observed only within generic sections. This organisation reproduces the manner in which Donne’s original readers first encountered the poems in the various manuscripts of his elegies and satires that circulated in Donne’s lifetime. Volume One contains the Epigrams, Verse Letters to Friends, Love Lyrics, Love Elegies and Satires; Volume Two contains the religious poems, Wedding Celebrations, Verse Epistles to Patronesses, Commemorations, and the Anniversaries. The lyrics have been arranged alphabetically for ease of reference and because, in all but a few cases, precise date of composition is impossible to determine. Each poem has extensive editorial commentary designed to put the twenty-first century reader in possession of all that is necessary fully to appreciate Donne’s work. A substantial headnote sets each poem in its historical and literary context, while the annotations give detailed guidance on the wealth of classical and religious allusions and give full representation to the literary, historical and philosophical culture out of which the poems grew. In keeping with the traditions of the series, Donne’s own text has been modernised in punctuation and spelling except where to do so would alter or disrupt a rhyme.

Epigrams
Hero and Leander
Pyramus and Thisbe
Niobe
Naue Arsa (A Burnt Ship)
Caso d’un Muro (Fall of a Wall)
Zoppo (A Lame Beggar)
Calez and Guyana
Il Cavaliere Giovanni Wingfield
A Self-accuser
A Licentious Person
Antiquary
The Ingler
Disinherited
The Liar
Mercurius Gallo-Belgicus
Phryne
An Obscure Writer
Klockius
Martialis Castratus (Raderus)
Ralphius
Ad Autorem (Joseph Scaliger)
Ad Autorem (William Covell)
Verse letters to Friends
To Mr Rowland Woodward(‘Zealously my Muse’)
To Mr Rowland Woodward(‘Muse not’)
To Mr Christopher Brooke
To Mr Ingram Lister(‘Of that short roll of friends’)
To Mr Thomas Woodward(‘At once from hence’)
To Mr Thomas Woodward(‘All hail, sweet poet’)
To Mr Thomas Woodward(‘Pregnant again’)
To my Lord of Derby
To Mr Beaupré Bell (1)
To Mr Beaupré Bell (2)
To Mr Thomas Woodward(‘Haste thee, harsh verse’)
To Mr Samuel Brooke
To Mr Everard Guilpin
To Mr Rowland Woodward(‘Kindly I envy thy song’s perfectïon’)
To Mr Ingram Lister(‘Blest are your north parts’)
To Mr Rowland Woodward(‘Like one who in her third widowhead’)
To Mr Rowland Woodward(‘If, as mine is, thy life a slumber be’)
The Storm
The Calm
To Mr Henry Wotton(‘Here’s no more news than virtue’)
To Mr Henry Wotton(‘Sir, more than kisses’)
Henrico Wotton in Hibernia Belligeranti
To Sir Henry Wotton at his Going Ambassador to Venice
Amicissimo et meritissimo Ben. Ionson in ‘Vulponem’
To Sir Henry Goodyer
To Sir Edward Herbert at Juliers
Upon Mr Thomas Coryat’s ‘Crudities’
In eundem Macaronicon
A Letter Written by Sir Henry Goodyer and John Donnealternis vicibus
To Mr George Herbert with my Seal of the Anchor and Christ
To Mr Tilman after he had Taken Orders
De libro cum mutuaretur impresso, ... D. D. Andrews
Love Lyrics (‘Songs and Sonnets’)
Air and Angels
The Anniversary
The Apparition
The Bait
The Blossom
Break of Day
The Broken Heart
The Canonization
Community
The Computation
Confined Love
The Curse
The Damp
The Dissolution
The Dream
The Ecstasy
The Expiration
Farewell to Love
A Fever
The Flea
The Funeral
The Good-morrow
Image and Dream
The Indifferent
To a Jet Ring Sent to me
Lecture upon the Shadow
The Legacy
Love’s All (Love’s Infiniteness)
Love’s Deity
Love’s Diet
Love’s Exchange
Love’s Usury
A Nocturnal upon Saint Lucy’s Day
The Message
Mummy (Love’s Alchemy)
Negative Love
The Paradox
Platonic Love (The Undertaking)
The Primrose
The Prohibition
The Relic
Song: ‘Go and Catch a Falling Star’
Song: ‘Sweetest Love, I do not Go’
Spring (Love’s Growth)
The Sun Rising
The Triple Fool
TwickenhamGarden
A Valediction Forbidding Mourning
A Valediction: Of my Name in the Window
A Valediction: Of the Book
A Valediction: Of Weeping
The Will
Witchcraft by a Picture
Woman’s Constancy
Love Elegies
The Bracelet
The Comparison
The Perfume
Jealousy
Love’s Recusant
Love’s Pupil
Love’s War
To his Mistress Going to Bed
Change
The Anagram
To his Mistress on Going Abroad
His Picture
On Love’s Progress
Autumnal
Satire
Satyre 1(‘Away, thou changeling, motley humorist’)
Satyre 2(‘Sir, though (I thank God f
2. Annunciation
3. Nativity
4. Temple
5. Crucifying
6. Resurrection
7. Ascension
To Mrs Magdalen Herbert: Of St Mary Magdalen
Upon the Annunciation when Good Friday Fell upon the Same Day
Sonnet: ‘Oh, to vex me’
A Litany
Resurrection(imperfect)
Divine Meditations
1. ‘Thou hast made me’
2. ‘As due by many titles’
3. ‘Oh might those sighs and tears’
4. ‘Father, part of his double interest’
5. ‘O my black soul!’
6. ‘This is my play’s last scene’
7. ‘I am a little world’
8. ‘At the round earth’s imagined corners’
9. ‘If poisonous minerals’
10. ‘If faithful souls’
11. ‘Death, be not proud’
12. ‘Wilt thou love God’
Holy Sonnets
1. ‘As due by many titles’
2. ‘O my black soul!’
3. ‘This is my play’s last scene’
4. ‘At the round earth’s imagined corners’
5. ‘If poisonous minerals’
6. ‘Death, be not proud’
7. ‘Spit in my face’
8. ‘Why are we’
9. ‘What if this present’
10. ‘Batter my heart’
11. ‘Wilt thou love God’
12. ‘Father, part of his double interest’
Verses translated for Ignatius his Conclave
Good Friday: Made as I was Riding Westward that Day
To Mr George Herbert with my Seal of the Anchor and Christ
Sonnet: ‘Since she whom I loved’
To Christ
Upon the Translation of the Psalms by Sir Philip Sidney and
the Countess of Pembroke his Sister
At the Seaside, going over with the Lord Doncaster into Germany, 1619
The Lamentations of Jeremy, for the most part according to Tremellius
Hymn to God my God in my Sickness
Wedding Celebrations
Epithalamion Made at Lincoln’s Inn
An Epithalamion on the Lady Elizabeth and Frederick, Count Palatine
Eclogue and Epithalamion at the Marriage of the Earl of Somerset
Verse epistles to Patronesses
To Lady Bedford at New Year’s Tide
To the Countess of Bedford(‘Reason’)
To Mrs Magdalen Herbert(‘Mad paper, stay’)
To the Countess of Bedford(‘You have refined me’)
To the Countess of Bedford(‘Honour is so sublime perfection’)
To the Countess of Huntingdon
To the Countess of Bedford(‘To’ve written then’)
To the Honourable Lady the Lady Carey
To the Countess of Bedford(‘Your cabinet my tomb’)
To the Countess of Bedford (begun in France)
To the Countess of Salisbury
Commemorations
Elegy: To the Lady Bedford(‘You that are she’)
An Elegy upon the Death of Lady Markham
An Elegy upon the Death of Mistress Bulstrode: ‘Death, I recant’
Elegy on Mistress Bulstrode[by Lady Bedford]
Elegy upon the Death of Mistress Bulstrode: ‘Language, thou art too narrow’
Elegy on Prince Henry
Obsequies to the Lord Harington, Brother to the Countess of Bedford
A Hymn to the Saints and Marquis of Hamilton
The Anniversaries
To the Praise of the Dead and ‘The Anatomy’[by Joseph Hall]
The First Anniversary: An Anatomy of the World
A Funeral Elegy
The Harbinger to the Progress[by Joseph Hall]
The Second Anniversary: Of the Progress of the Soul
A Probable Attribution
Ignatius Loyolae _ðoèÝùóéò
Dubia
Sappho to Philaenis
The Token
Variety

The Complete Poems of John Donne