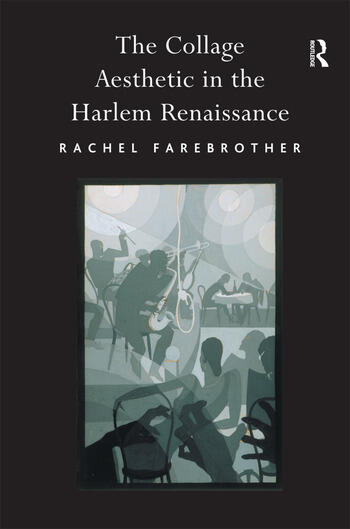 The Collage Aesthetic in the Harlem Renaissance

Beginning with a subtle and persuasive analysis of the cultural context, Farebrother examines collage in modernist and Harlem Renaissance figurative art and unearths the collage sensibility attendant in Franz Boas's anthropology. This strategy makes explicit the formal choices of Harlem Renaissance writers by examining them in light of African American vernacular culture and early twentieth-century discourses of anthropology, cultural nationalism and international modernism. At the same time, attention to the politics of form in such texts as Toomer's Cane, Locke's The New Negro and selected works by Hurston reveals that the production of analogies, juxtapositions, frictions and distinctions on the page has aesthetic, historical and political implications. Why did these African American writers adopt collage form during the Harlem Renaissance? What did it allow them to articulate? These are among the questions Farebrother poses as she strives for a middle ground between critics who view the Harlem Renaissance as a distinctive, and necessarily subversive, kind of modernism and those who foreground the cooperative nature of interracial creative work during the period. A key feature of her project is her exploration of neglected connections between Euro-American modernism and the Harlem Renaissance, a journey she negotiates while never losing sight of the particularity of African American experience. Ambitious and wide-ranging, Rachel Farebrother's book offers us a fresh lens through which to view this crucial moment in American culture.

Rachel Farebrother is lecturer in American Studies at the University of Swansea, UK.

Prize: Honourable Mention in the British Association of American Studies Book Prize 2009 '... the book admirably demonstrates how 'marginal, or even eccentric' (p. 48) approaches to the Harlem Renaissance and modernism can usefully illuminate their subjects anew.' Review of English Studies 'The Collage Aesthetic is an intelligent book that extends past research produced in the larger fields of American vernacular modernism and African-American culture to point in a new and dynamic direction for interdisciplinary approaches in American studies... Farebrother's book will help to rethink aesthetic concerns and the powerful alternative mode of knowledge that comes from literary texts and the arts.' Zeitschrift fÃ¼r Anglistik und Amerikanistik 'It is always a pleasure to review a book that one wholeheartedly enjoys and admires. The College Aesthetic in the Harlem Renaissance is a beautifully, carefully conducted study. It is also sufficiently contained in its focus on three writers to allow the reader’s mind to roam to other writers, other works, and related issues. I found the book inspiring in its offering a key term that not only connects visual arts, anthropology, and creative writing but also stages a model exploration of the complicated relations between Harlem Renaissance writing and other modernist work, and the cultural and political contexts within which both occurred. Farebrother makes a strong case for the payoffs of a critical approach that reveals such new relations without erasing important, meaning-making distinctions.' African American Review

The Collage Aesthetic in the Harlem Renaissance