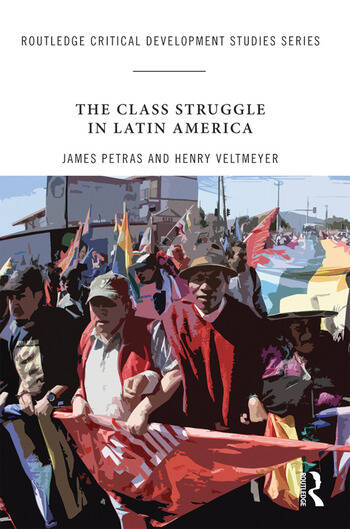 This innovative book offers a unique perspective on the evolving dynamics of class struggle, engaging both the destructive forces of capitalist development and those seeking to consolidate the system and preserve the status quo, alongside the efforts of popular resistance concerned with the destructive ravages of capitalism on humankind, society and the global environment.

Using theoretical observations based on empirical and historical case studies, this book argues that the class struggle remains intrinsically linked to the march of capitalist development. At a time when post-neo-liberal regimes in Latin America are faltering, this supplementary text provides a guide to the economic and political dynamics of capitalist development in the region, which will be invaluable to students and researchers of international development, anthropology and sociology, as well as those with an interest in Latin American politics and development.

Chapter 1 Class Struggle Back on the Agenda

Chapter 3 Accumulation by Dispossession — and the Resistance

Chapter 5 Argentina: The Return of the Right

Chapter 7 Democracy Without the Workers: 25 years of the Labour Movement and Mature Neoliberalism in Chile

Chapter 10 Peru: The Return of the Class Struggle from Below

Chapter 11 Venezuela: In the Eye of the Storm

Chapter 12 The Return of the Right

James Petras is Professor Emeritus of sociology at Binghamton  University in New York, and Adjunct Professor in international development studies at Saint Mary’s University (Halifax, Canada). He is the author of over 60 books and numerous other writings on issues of world and Latin American developments.