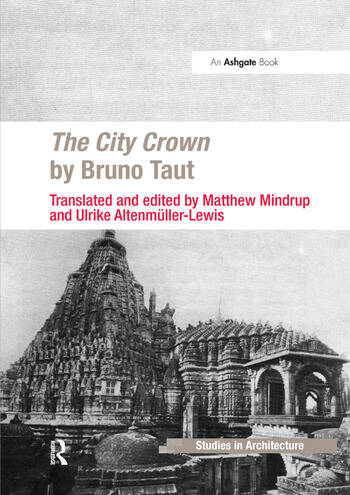 The City Crown by Bruno Taut

This book is the first English translation of the German architect Bruno Taut’s early twentieth-century anthology Die Stadtkrone (The City Crown). Written under the influence of World War I, Taut developed The City Crown to promote a utopian urban concept where people would live in a garden city of ’apolitical socialism’ and peaceful collaboration around a single purpose-free crystalline structure. Taut’s proposal sought to advance the garden city idea of Ebenezer Howard and rural aesthetic of Camillo Sitte’s urban planning schemes by merging them with his own ’city crown’ concept. The book also contains contributions by the Expressionist poet Paul Scheerbart, the writer and politician Erich Baron and the architectural critic Adolf Behne. Although the original German text was republished in 2002, only the title essay of The City Crown has previously been translated into English. This English translation of Taut’s full anthology, complete with all illustrations and supplementary texts, fills a significant gap in the literature on early modern architecture in Germany and the history of urban design. It includes a translators’ preface, introduction and afterword to accompany the original composition of essays, poems, designs and images. These original texts are accompanied by illustrations of Taut’s own designs for a utopian garden city of 300,000 inhabitants and over 40 additional historic and contemporary examples. The new preface to The City Crown explains the premise for the English translation of Taut’s anthology, its organization and the approaches taken by the translators to maintain the four different voices included in the original work. Matthew Mindrup’s introduction critically examines the professional and intellectual developments leading up to and supporting Bruno Taut’s proposal to advance the English garden city concept with a centralized communal structure of glass, the city crown. Through the careful examination of original

Matthew Mindrup is Senior Lecturer of Architecture at the University of Sydney. An architect by training, Matthew completed a Ph.D. In Architecture and Design at Virginia Tech University in 2007 on the physical and metaphysical coalition of two architectural models assembled by Kurt Schwitters in the early 1920s. Dr Mindrup's ongoing research in the history and theory of architectural design locates and projects the implications that materials have in the design process. Dr. Mindrup has presented some of this research at conferences and published others in The Journal of Architectural Education (JAE), Interstices, Wolkenkuckucksheim and his edited volume The Material Imagination: Reveries on Architecture and Matter from Ashgate Publishing. Ulrike AltenmÃ¼ller-Lewis is Associate Professor at the Antoinette Westphal College of Media Arts & Design at Drexel University in Philadelphia. Prior to this position, she has taught at the Bauhaus-UniversitÃ¤t Weimar in Germany and at the Washington Alexandria Architecture Center of Virginia Tech. Ulrike is a registered architect in the United States as well as in Germany and has practised in both countries. In 2008 she earned her Doctoral degree at the Bauhaus-UniversitÃ¤t Weimar on contemporary school architecture in Finland. She investigated the correlation between pedagogical concepts and the spatial arrangements that best support teaching and learning. Ulrike’s ongoing research focuses on translations of seminal German texts on architecture as well as on educational buildings and the impact of the built environment on human wellbeing and performance. Ulrike has presented her findings at numerous national and international conferences and her writings have been published in the USA, Germany, Switzerland and Turkey.

’This English translation of Bruno Taut's The City Crown with informative essays by Matthew Mindrup and Ulrike AltenmÃ¼ller-Lewis is a welcome addition to an understanding of this important modernist architect. The essays place The City Crown in the context of Taut's other utopian books, his extensive work in housing, and within the broader history of the early twentieth century.’ Rosemarie Bletter, City University of New York, USA

The City Crown by Bruno Taut