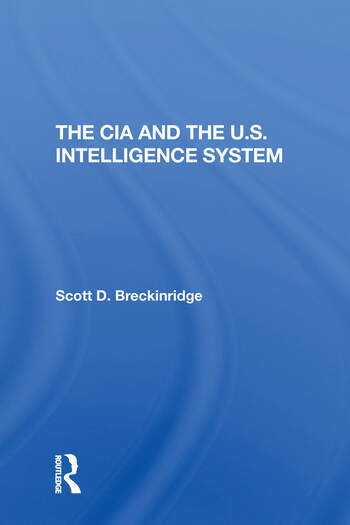 The Cia And The U.S. Intelligence System

Foreign policy—including economic policy and national security policy—and the appropriate planning, decisionmaking, and execution of that policy depend upon foreign intelligence, which must be collected on a global scale, checked, compared, sifted, analyzed, and coordinated. The collection, analysis, and delivery of this body of information require

Scott D. Breckinridge served with the CIA for more than twenty six years, both overseas and in Washington. For three years, he was the agency's briefing officer for the White House staff. He represented the agency before the 1975-1976 congressional investigating committees. He also served as liaison officer with the intelligence organizations of an allied nation and coordinated assignments with other units or committees of the government's intelligence community. His last sixteen years were spent with the CIA's Inspector General's detachment, with six as the Deputy Inspector General. Mr. Breckinridge was twice awarded the CIA's Distinguished Intelligence Medal, the agency's highest award.

The Cia And The U.S. Intelligence System